No. 16 Baylor at home could knock Texas out of Big 12 race 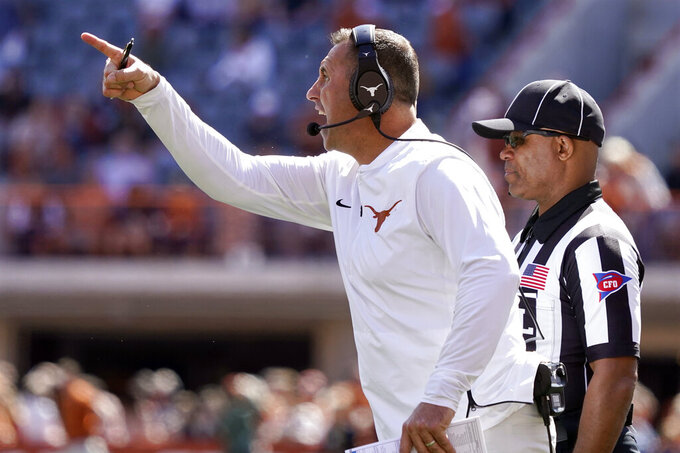 Texas head coach Steve Sarkisian shouts to an official during the second half of an NCAA college football game against Oklahoma State in Austin, Texas, Saturday, Oct. 16, 2021. (AP Photo/Chuck Burton) 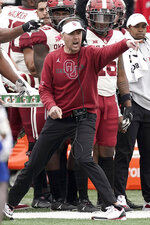 Some things to watch in Week 9 of the Big 12 Conference:

Texas at No. 16 Baylor. While the Longhorns are still looking for a breakthrough victory in coach Steve Sarkisian's first season, Baylor has already tripled its overall win total in coach Dave Aranda's second year. Both teams are coming off their open date, and got to that break in much different ways. The Longhorns (4-3, 2-2 Big 12) blew early double-digit leads while losing consecutive games to fourth-ranked Oklahoma and No. 15 Oklahoma State, so they certainly can't afford another setback if they have any chance to get to the Big 12 title game. Baylor (6-1, 3-1), the league runner-up two years ago, rebounded from its only loss with a pair of quality victories, the last over ranked future Big 12 team BYU.

Texas Tech interim coach Sonny Cumbie vs. Oklahoma coach Lincoln Riley. While the Red Raiders (5-3, 2-3) are nearly three-touchdown underdogs, they are looking for a fresh start after Matt Wells was fired this week following their second consecutive conference home loss — both following road wins. Cumbie is the former Tech quarterback who was in his first season as the offensive coordinator. The 16-game winning streak by fourth-ranked Oklahoma (8-0, 5-0) is the longest in the country. Both coaches are from small West Texas towns — Riley from Muleshoe and Cumbie from Snyder. When Cumbie first got into coaching as a graduate assistant at his alma mater in 2009, Riley was a receivers coach for the Red Raiders.

Iowa State running back Breece Hall has extended his Big 12-record streak to 19 consecutive games with a rushing touchdown. ... Hall is among seven Big 12 players among the top 25 in the FBS in all-purpose yards. Big 12 leader Bijan Robinson of Texas (161.6 yards per game) is third nationally, and Hall (143.9 ypg) is ninth. The others in the top 25 are Baylor's Tresten Ebner (140.4 ypg), Oklahoma State's Jaylen Warren (130.0 ypg), TCU's Zach Evans (129.7 ypg), Kansas State's Deuce Vaughn (128.1 ypg) and West Virginia's Winston Wright (128.0 ypg). ... No. 22 Iowa State (5-2, 3-1) and Texas Tech could both get bowl eligible with wins Saturday. The Cyclones, coming off their win over Oklahoma State, go to West Virginia. Oklahoma, Oklahoma State and Baylor are already bowl eligible.

Kansas (1-6, 0-4) actually led Oklahoma in the fourth quarter at home last Saturday before losing to the Sooners for the 17th time in a row. Now the Jayhawks have to travel to play No. 15 Oklahoma State (6-1, 3-1), which is coming off its first loss. The Cowboys have won 16 of 17 in the series, winning the last 11 in a row by an average margin of nearly 27 points.

Baylor linebacker Dillon Doyle is producing on both sides of the ball. He became the first player in program history to have a rushing touchdown, a receiving touchdown and a sack in the same game, when he did it against BYU. The TDs came on the part-time fullback's only two offensive touches.