No. 16 Syracuse looks to rebound in home game vs. Notre Dame 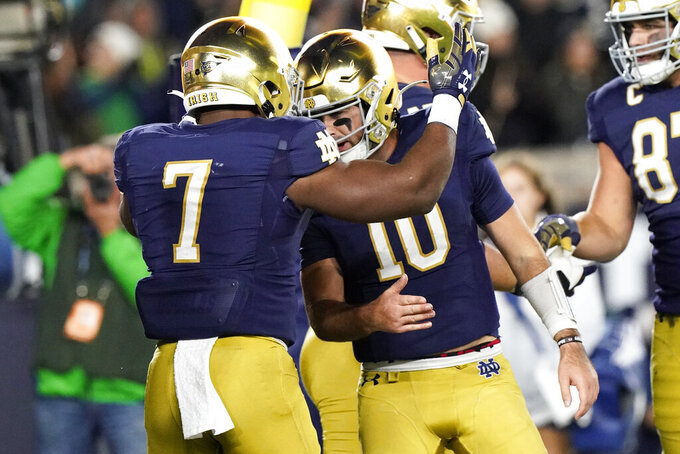 SYRACUSE, N.Y. (AP) — No. 16 Syracuse is no longer on the shrinking list of unbeaten teams after letting a big one slip away against fifth-ranked Clemson at Death Valley.

The Orange (6-1) squandered an 11-point halftime lead for a 27-21 loss last week to the still-unbeaten Tigers. But it's no time to sulk with Notre Dame (4-3) visiting Saturday and games against Pitt, Florida State and No. 10 Wake Forest looming.

“We're definitely 100% focused on Notre Dame," Orange tailback Sean Tucker said. “We're confident. Things didn’t go our way in the second half (last week). It was a game we thought we had. It’s a loss we’ll learn from.”

Rest assured that Tucker will be used a lot more than he was against Clemson. Poised to move into fifth place on Syracuse's all-time rushing list — Tucker set a school season record last year with 1,496 yards — he had only five carries against Clemson, and just one in the decisive fourth quarter.

Meanwhile, Notre Dame is gearing up for the challenge of taking on Tucker and a tough two-game stretch — at Syracuse this Saturday and hosting Clemson next Saturday.

“I think he might be the best that we’ve seen,” Ïrish coach Marcus Freeman said of Tucker. “I mean, he is that good because he’s complete. On third down, he’s a matchup problem out of the backfield.”

Entering the Clemson game, Tucker was averaging 20 carries. He gained 54 yards on five tries against the Tigers.

The Fighting Irish have played their best football on the road. They led No. 2 Ohio State 10-7 at halftime of the season opener before losing by 11, beat a BYU team that was ranked earlier in the season and handed No. 21 North Carolina its lone loss. Playing inside presents a different road environment that makes it more difficult for visiting teams to communicate. The Orange are 5-0 at home.

Syracuse's swarming 3-3-5 defense calls itself “The Mob,” a fitting moniker for a unit that leads the ACC in scoring defense (15.1 points per game) and is sixth nationally. Its three defensive touchdowns is tied for third nationally.

The Orange defenders are on pace for their best performance since 1997 (15.9 ppg).

Irish quarterback Drew Pyne took over for the injured Tyler Buchner prior to Notre Dame’s third game. In his first three starts, Pyne completed 74.1% of his passes for 701 yards, eight touchdowns and a single interception, and the Irish rattled off three straight victories. But that completion percentage has fallen precipitously in Notre Dame’s most recent contests. Against Stanford and UNLV, he connected on 49.1% of his throws for 356 yards, three touchdowns and another interception.

Getting back on track won’t be easy in front of a hostile crowd indoors.

“That stadium is going to be rockin’,” Pyne said. “Those fans are going to be going crazy. They’re doing that for a reason because Syracuse is a really good team, but we’re controlling what we can control.”

Tucker and quarterback Garrett Shrader have combined for 39 TDs since the start of last season. It's the fourth-highest scoring backfield tandem in program history. Tucker has 22 rushing touchdowns, two more than Shrader. Tucker is ninth in total TDs at Syracuse (26).

Notre Dame has had a difficult time getting its offense going. The Irish scored on just two opening drives in the first six games, with field goals against Ohio State and BYU. That changed last week when Audric Estimé scored on a 12-yard run against UNLV to cap the game's first drive. It was the start of a 23-point flurry in the opening quarter of a 44-21 rout.