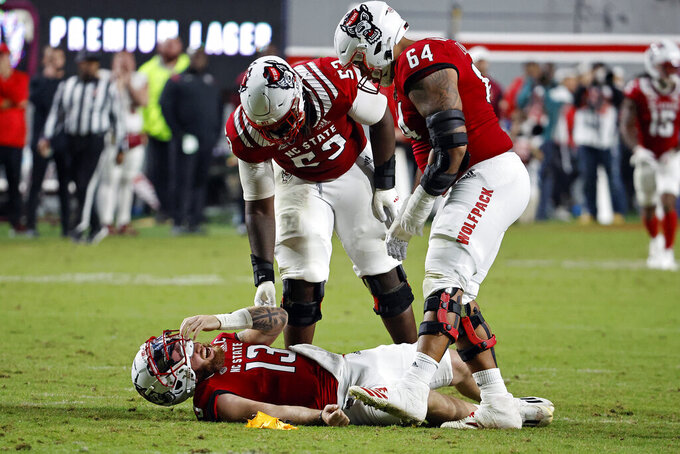 Line: Syracuse by 3 1/2, according to FanDuel Sportsbook.

Syracuse is off to its best start since 1987 and the matchup is key for both teams in the race for the Atlantic Division title. NC State has already lost to division leader Clemson and another setback would likely dash any hopes of playing for the conference championship. A win by the Orange would not only make Syracuse eligible for the postseason for the first time in four years, it also would set up a showdown next Saturday at No. 4 Clemson for first place in the division.

The NC State defense vs. Syracuse offense led by QB Garrett Shrader. Shrader has completed just over 70% of his passes and has thrown 10 TD passes with just one interception. Syracuse is fourth in scoring in the ACC, averaging 38.4 points, and the Wolfpack rank second to Syracuse in scoring defense, allowing 15.7 points per game.

Syracuse: LB Mikel Jones leads Syracuse with 35 tackles, including two sacks among his four TFLs, and has four QB hurries, one forced fumble, and one fumble recovery. Last year in a 41-17 loss to the Wolfpack he had 12 tackles, including 2.5 TFLs.

More than 45,000 tickets have been sold for the game, easily the most this season for the Orange. ... The game will mark the first time since the Orange joined the league in 2013 that a ranked Syracuse team plays a ranked ACC opponent. ... It's the first game in Syracuse between two top-20 teams since the 1998 season opener against Tennessee. ... Dunn is the FBS active leader in points (430) and field goals made (80). Syracuse's Andre Szmyt has 406 points and 75 field goals.