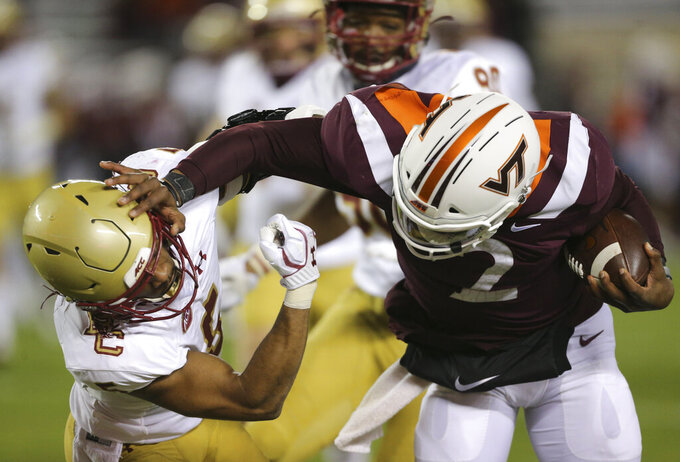 Justin Fuente makes it clear No. 19 Virginia Tech has many areas in which it needs to improve.

The good news for the Hokies (3-1, 3-1 Atlantic Coast Conference) is that reinforcements are likely on the way, though Fuente said he has learned not to take anything for granted.

The Hokies, without an average of 18 players because of coronavirus-related issues and injuries for their first four games, play at Wake Forest (2-2, 1-2) on Saturday.

“I’m hesitant to say anything. You see guys make comments, and the next thing you know, it bites them in the tail," Fuente said. “I know we’re doing everything in our power to adhere by the guidelines and do our best to control what we can in this situation.”

“That was probably the most normal week we’ve had thus far,” Fuente said.

The Demon Deacons will do all they can to prevent the comfort of normalcy. While the Hokies forced five turnovers by the Eagles, Wake Forest has committed one all season.

The issue for coach Dave Clawson's team will be run defense. They are second-to-last in the ACC at stopping the run (198.2 ypg), and the Hokies run it better than almost anyone. Khalil Herbert leads the nation with 148 yards per game, and the Hokies average 312.

That's not been their tendency under Fuente, at least before this season.

“Justin, I think, doesn’t get the credit he deserves for adjusting and adapting his offense the last two years, if you look at what they were doing in the first half of last season, and now what they did in the second half, and now how they’ve adjusted their offense to fit their personnel,” Clawson said of Fuente, whose pass-based preference is getting the year off. “He's really done a very masterful and innovative job of adjusting to to his strengths.”

Some other things to watch when Virginia Tech visits Wake Forest:

If the Hokies' run proficiency continues against the Demon Deacons' porous run defense, it could be a long day. Herbert's danger is only enhanced by the rounding into shape of formerly qaurantined QB Hendon Hooker, who ran for 164 yards and 3 TDs last week.

The Demon Deacons' only turnover through four games came on a fumble and they are plus 8 in that category. The Hokies are right behind them in the league standings at plus 5, having forced eight turnovers while committing just three.

Defensive stops could be at a premium. The Hokies are scoring a a 42-point rate, and the Demon Deacons average 40.3 points, although that figure is somewhat skewed by a 66-point output against Campbell. The Hokies' 42-point average is fifth among Power Five teams.

The Hokies are fifth in history with a streak of scoring in 325 games, but credit might go to the defense, In 2014, The Hokies and Demon Deacons played to a scoreless tie in regulation, and the Demon Deacons eventually prevailed 6-3 in double overtime.

Taylor Moris is averaging 14 yards per punt return, third nationally, and Donavan Greene ranks second nationally with a 43.5 kickoff return average, helped by a 96-yard return against Campbell. Virginia Tech is second in the league with a 32.2 average on kickoff returns, including an 83-yarder by Khalil Herbert that did not go for a touchdown.