No. 2 Cincinnati stays unbeaten with 27-20 win over Navy 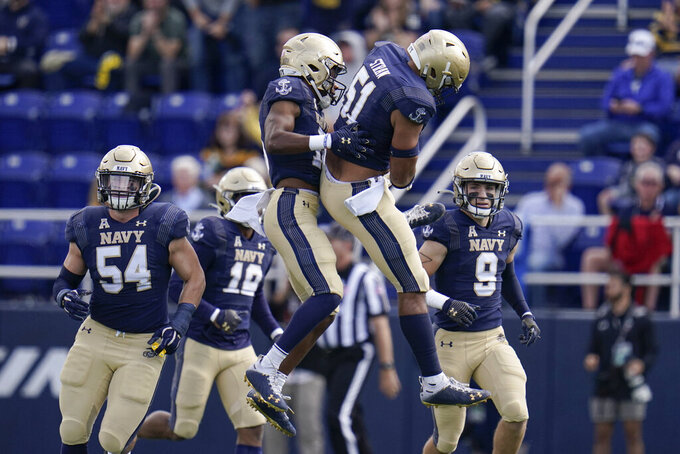 What was more grating was the fact No. 2 Cincinnati took a double-digit lead in the second half and then had to hold on late for the win.

“We’ve got to find ways, especially on the road, when you’re up, whatever it is, 13 points or something, to kind of close things out,” Fickell said. “That’s probably the only thing that I’m somewhat disappointed we couldn’t and didn’t do today, but we needed a challenge and we got one.”

The unbeaten Bearcats actually led by 17 at one point, but victory wasn’t secure until Arquon Bush intercepted a pass with 25 seconds left to wrap up a 27-20 victory Saturday.

The Bearcats (7-0, 3-0 American Athletic Conference) weren’t at their best, but they never looked like they were in danger until the final minute, when Tai Lavatai's 1-yard run made it a one-score game and Navy recovered an onside kick with 48 seconds left.

The Midshipmen (1-6, 1-4) didn’t do much with that final chance, though. Lavatai’s third-down pass was picked off by Bush near the Cincinnati 45.

The Bearcats were fortunate to lead by three after a mistake-filled first half, but they eventually snapped out of their offensive funk. Desmond Ridder threw for 176 yards and two touchdowns.

Navy was hosting a top-five team for the first time since 1984, and the Midshipmen didn’t trail until a wild swing at the end of the first half. With the game tied at 10, Navy was driving and looked poised to use up the remaining time in the second quarter. But after losing yards on back-to-back plays, the Midshipmen had to try a 51-yard field goal.

The kick was blocked, and Cincinnati’s Deshawn Pace nearly ran it back for a touchdown, but he stepped out of bounds with 1 second left. That was enough time for Alex Bales to kick a 52-yard field goal and give the Bearcats a 13-10 lead.

Jerome Ford’s 43-yard touchdown run made it 20-10, and Ridder added a 3-yard TD pass to Josh Whyle later in the third.

“I’m very very proud of our team, proud of our defense, but that’s not good enough,” said Navy cornerback Jamal Glenn, who had an interception and recovered the late onside kick. “Coming into the game ... we stressed, moral victories is not a thing. Yeah, they’re the No. 2 team in the country, but we want to win games.”

Cincinnati was coming off back-to-back 50-point performances, but the first half of this one was a slog. Navy drove 79 yards in 7:12 and took a 7-0 lead on Lavatai’s 2-yard run.

The Bearcats quickly tied it on a 31-yard pass from Ridder to Whyle.

With Cincinnati down 10-7, Ridder threw an interception deep in Navy territory, but after that the Bearcats scored on their next four possessions.

“Everyone’s going to give us our best,” Ridder said. “Navy was a great team. We’re playing against the United States Navy, so we know that they’re going to fight all four quarters. The game’s not going to be over until the clock hits zero. That’s what we learned today, that we can’t take nothing for granted, can’t take any game for granted.”

Cincinnati: Navy presents some unique challenges for its opponents, but it wasn’t the offense that was causing the Bearcats that much trouble. Cincinnati just didn’t look smooth offensively for much of the day.

Navy: The Midshipmen kept the Bearcats from making too many big plays early on, and Navy’s rarely used passing game was good enough to mount a comeback at the end.

The end of the game wasn’t Navy’s only onside kick attempt. The Midshipmen also tried a surprise onside after their early touchdown, but Cincinnati recovered.

“We came into the week, after our first touchdown, that we were going to surprise them with the onside kick,” Navy coach Ken Niumatalolo said. “We have been almost perfect this week, and it didn’t work. We had the worst one we had all week. That gave them a short field.”

The Bearcats’ average starting field position was their own 43. Navy’s was its own 26.

It wasn’t much of a surprise that Navy controlled the ball for most of the game — 39:27 in all.

While Cincinnati was struggling with Navy, No. 3 Oklahoma was also having problems with Kansas. This game will fuel the Bearcats’ detractors, but they remained unbeaten and have plenty of chances to win more impressively later in the season.

Cincinnati: The Bearcats play at Tulane next Saturday.

Navy: The Midshipmen play at Tulsa on Friday night.