No. 21 Pitt faces speedy test against No. 24 Louisville 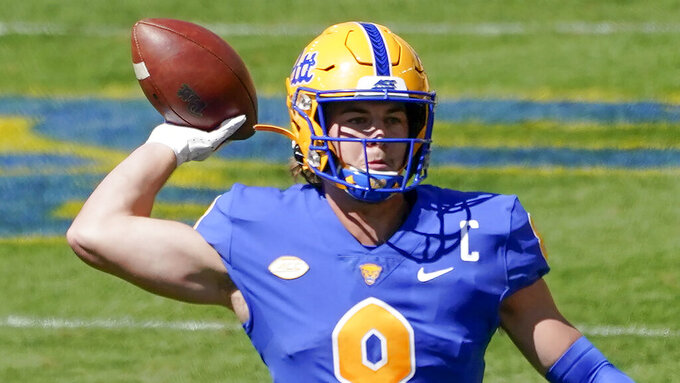 PITTSBURGH (AP) — The warm-up portion of No. 21 Pittsburgh's schedule is over and coach Pat Narduzzi knows it.

The evidence jumped off his television screen while Narduzzi watched No. 24 Louisville's loss to No. 12 Miami a week ago, a game that was more track meet than slugfest. The Cardinals rolled up more than 500 yards, moving the ball with the kind of ease that's become the program's signature under second-year coach Scott Satterfield.

Austin Peay and Syracuse this is not.

“You notice their speed,” Narduzzi said of the Cardinals. “When I’m watching them, they’re fast, their O-line is aggressive. They’re very aggressive.”

So, Narduzzi believes, are the Panthers (2-0, 1-0 Atlantic Coast Conference). Their defense has certainly looked it through two weeks, collecting 10 sacks and allowing 154 yards a game, a number that would be significantly lower if not for a busted coverage that led to a 69-yard touchdown pass by the Orange last week.

While Narduzzi respects the Cardinals (1-1, 0-1), he's not planning on deviating much from the identity his program has slowly built during his five-plus seasons. Narduzzi and defensive coordinator Randy Bates have put together a group that's developing a reputation as one of the ACC's best.

“We’re going to kind of come at you, okay?” Narduzzi said.

Pitt doesn't try to outsmart opposing offenses as much as it tries to overwhelm them. The problem, Satterfield said, isn't trying to figure out what the Panthers are going to do. It's stopping them from doing it.

“It’s not complicated, but they are good, they are very good at what they do,” he said. “You have to earn everything, there will not be any freebies.”

Maybe, but few teams have been able to slow down the Cardinals since Satterfield arrived in December 2018. He oversaw a remarkable turnaround in 2019, guiding a team that won just two games the year before he arrived to eight wins and a Music City Bowl victory last season.

The ACC is wide open behind No. 1 Clemson. Louisville plans to be part of the mix. A second straight conference loss would put a significant damper on those plans.

“There are several things that we have got to get better at, there is no question about it,”Satterfield said. “We’re still early in the season and we are working toward that.”

Louisville’s starting quarterback is back to being known as Malik Cunningham nearly a year after switching to his given first name of Micale.

“So many people were calling me Malik, so that’s what I decided to go by,” the junior said. “No specific reason.”

Cunningham has thrived no matter what he’s called, 45 of 70 passes for 650 yards and six touchdowns with two interceptions through two games.

The Panthers will ditch their traditional blue-and-gold jerseys for a new look that serves as a tribute to both the school's campus and the heritage of the city. Pitt will don alternate dark gray metallic uniforms featuring a patch honoring blacksmith Samuel Yellin as well as an “H2P" logo similar in style to the ones worn by employees of the U.S. Steel Corp.

“It’s Pittsburgh through and through,” Narduzzi said. "It’s the Steel City. We got to go out and play with some pride with those things on.

The Cardinals yielded 10 plays of at least 18 yards against Miami, including 75-yard TDs on consecutive one-play drives. Those big plays also helped the Hurricanes convert 6 of 13 third-down chances and complete four consecutive scoring drives in both halves.

Pitt's defense has been so solid, the offense hasn't had to do much. That will likely need to change as the Panthers eye their first 3-0 start since 2014. Narduzzi lamented missed chances against Syracuse, including three failed field goal attempts, though he didn't place the blame on Alex Kessman.

“We (anybody) can all point at the kicker,” Narduzzi said. “There’s those fingers pointing back at ourselves. How about we score touchdowns when we’re inside the 25-yard line? I want touchdowns, not field goals.”

By Will Graves 45 minutes ago
By Anne M. Peterson 4 hrs ago
5 hrs ago
By Greg Beacham 5 hrs ago
6 hrs ago