No. 22 Syracuse eyes first win at Pittsburgh in 21 years 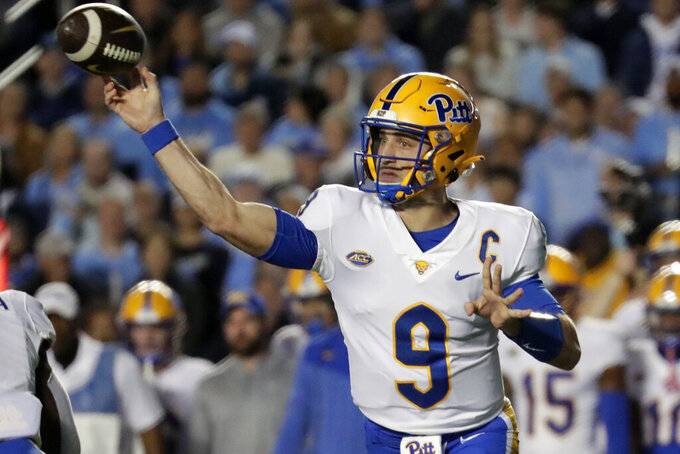 PITTSBURGH (AP) — Syracuse has spent most of the fall upending expectations. Ripping off six straight victories to start the season will do that.

Losses to Clemson and Notre Dame have slowed momentum a bit, though the 22nd-ranked Orange (6-2, 3-1 ACC) can take another step forward by doing something the program hasn't done in more than two decades: win in Pittsburgh.

Syracuse gets another chance on Saturday when it faces the defending ACC champion Panthers (4-4, 1-3), who saw any remote chance of claiming a second straight Coastal Division crown evaporate after wilting late against North Carolina last week.

The Orange, surprisingly, still have an outside shot of capturing the Atlantic, though it likely needs to win out and hope Clemson stumbles a couple of times down the stretch. It certainly beats the usual alternative of entering November and not having any shot at all.

“We just have to bounce back," Syracuse defensive back Ja’Had Carter said. "Those two losses were major, but we’re just in the mindset now that we can’t lose anymore because we want to get to that ultimate goal (winning the division). We’re just focused and putting our head down and got to come out with a victory.”

Something the Orange haven't done at Acrisure Stadium (formerly Heinz Field) since 2001. No wonder Pitt coach Pat Narduzzi shrugged this week when asked about the program's long rivalry against Syracuse, one that dates to 1916 but has seen the Panthers win 17 of the last 20 meetings.

“I think we all go back to the Big East days,” Narduzzi said. “Is it one of those where we’re going to go fight in the tunnel? I don’t think so. But it’s a rival game. But I don’t know if it’s to that extent.”

A win by the Orange might provide the Panthers with a refresher.

“We just know what we have to do,” Carter said. “Two games didn’t go our way, so we’ve just got to come out with that (under) dog mentality.”

With USC transfer quarterback Kedon Slovis off to a slow start, the Panthers have relied heavily on running back Israel Abanikanda in a return to the “ground and pound” approach that has long been the standard at Pitt before former quarterback Kenny Pickett's breakout Heisman Trophy campaign last season.

Abanikanda leads the ACC in rushing (135.8 yards per game) and tops the nation in all-purpose yards and has piled up 17 touchdowns, or seven more than he had in his first two seasons combined. He'll face a Syracuse defense that was pushed around by Clemson and Notre Dame, games in which the Orange surrendered a combined 485 yards on the ground.

“Their back, No. 2, he does a lot of different things and is very explosive,” Orange linebacker Marlowe Max said. "We’re focusing on shutting down the run.”

Syracuse quarterback Garrett Shrader, who was injured in the Orange’s six-point loss at Clemson on Oct. 22, did not play in the second half of last week’s home loss to Notre Dame. He started the game by throwing a pick-six on the first play from scrimmage and coach Dino Babers replaced him with redshirt freshman Carlos Del Rio-Wilson in the third quarter.

Neither player was made available this week for interviews and both are listed 1-2 on the depth chart for Pitt. If Del Rio-Wilson gets the nod, it’ll be the first career start for the Florida transfer.

“We’re preparing for both for them,” Narduzzi said. “We won’t change our scout team quarterbacks for that matter, but they’re both guys that are athletic. They both throw the ball well. I don’t know if the offense changes a whole bunch based on who plays.”

The Panthers have struggled to close out opponents of late. Louisville ripped off 17 unanswered fourth-quarter points to win going away two weeks ago and North Carolina followed it up by scoring three touchdowns in the final 15 minutes to turn a 24-21 deficit into a 42-24 victory.

“Historically I think we’ve been a pretty good fourth-quarter team, so is that something we’re doing or is it something the other team is doing?” Narduzzi said. “If the other team is a good fourth-quarter team, and both of them (games) are on the road in good atmospheres, so as a coach you never know what to attribute it to. ... I think the parity in college football and obviously around the ACC is strong, as well. ”