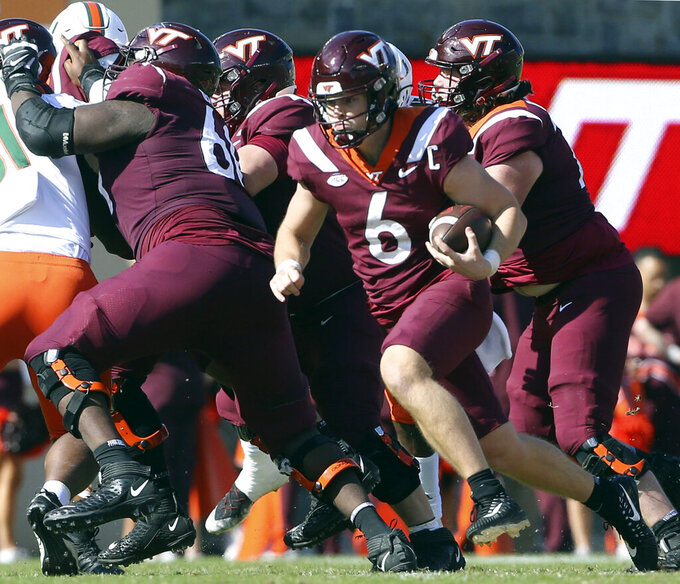 Virginia Tech quarterback Grant Wells (6) runs for a first down in the second half of an NCAA football game against Miami, Saturday Oct. 15 2022, in Blacksburg Va. (Matt Gentry/The Roanoke Times via AP)

The Wolfpack's chances of winning the ACC's Atlantic Division race with head-to-head losses with No. 5 Clemson and No. 16 Syracuse are likely gone. But N.C. State still has a shot at the program's second 10-plus win season. The Hokies are trying to end a four-game losing streak under first-year coach Brent Pry.

N.C. State's reshaped offense vs. Virginia Tech's defense. The Wolfpack spent an open week tweaking the offense after losing starting quarterback and preseason league player of the year Devin Leary to a season-ending injury. That unit had a tough debut against Syracuse, but might have more success with Leary successor Jack Chambers at the helm of an offense geared to take advantage of his strengths. The Hokies, meanwhile, rank 10th in the ACC in scoring defense (25.1) and ninth in total defense (357.9).

N.C. State: Chambers. The Charleston Southern graduate transfer has had his best success with his legs, running for 97 yards in the five-plus quarters since taking over for Leary.