No. 25 Flames facing uphill climb in visit to Virginia Tech 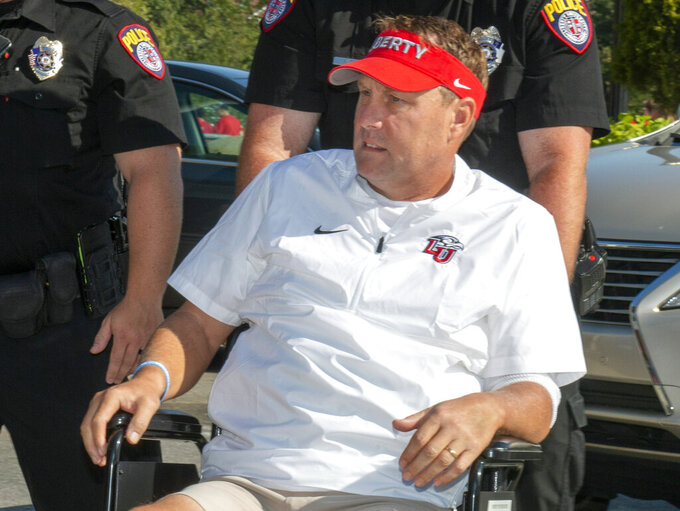 The oddsmakers don't give No. 25 Liberty much chance in their first game as a member of the Top 25, and coach Hugh Freeze knows Virginia Tech has a distinct advantage.

“They’re bigger, faster, stronger and deeper,” Freeze said this week. "You know, ... when you see it in those terms as a coach, you know it’s an uphill climb and until we get a depth chart that’s similar to theirs, I’ll probably always feel that way.

"But I felt that way before, too," the former Ole Miss coach said, “playing Alabama and LSU and Auburn.”

The Flames (6-0) will arrive at Lane Stadium riding an eight-game winning streak dating back to last season, but they haven't faced a game as ominous as they figure to get Saturday.

Virginia Tech (4-2) has battled player shortages all season because of COVID-19-related issues, but has remained competitive because of an offense that is 14th nationally, averaging 37.7 points. The Hokies also average 290 rushing yards, second among teams with five games.

The Flames, meanwhile, are fourth nationally in rushing, averaging 255.5 yards, and are 14-5 since Freeze took over last season.

“I’m not surprised, no,” said Hokies coach Justin Fuente, who faced Freeze twice when he was at Memphis and Freeze was at Mississippi. “He’s at a place with resources, and he’s been proven to be a more than capable football coach through his many, many stops."

The teams have met once before, with Virginia Tech winning 36-13 in Fuente's debut.

Some other things to watch when Liberty plays at Virginia Tech:

Flames quarterback Malik Willis originally signed with the Hokies, who wanted him to play defensive back, but instead wound up at Auburn and then transferred. He's coming off a game with six touchdowns passes and one rushing touchdown against Southern Miss and might want to show Virginia Tech that he was a quarterback option all along.

Khalil Herbert leads all FBS players — by 45 yards — in all-purpose average with 205.8, and is second in rushing average in the same group at 133.8 yards. The Hokies, meanwhile, want to get the ball in Herbert's hand more.

The Flames' opponents to date have a combined 4-28 record, but that includes 1-6 Syracuse, the first Atlantic Coast Conference team they have ever beaten. The Hokies are 16 1/2-point favorites, so winning here would really make a statement for Liberty.

Hokies quarterback Hendon Hooker ran for 164 yards and three TDs last week against Louisville and has seven rushing TDs and four passing. The Flames are allowing just 294 yards per game on defense, but Freeze said they haven’t faced a set of weapons like this all season.

“Their offensive line and running backs and quarterback, they’re as good as I’ve seen even back when I was in a power five conference,” he said.

Virginia Tech has scored 40 or more points four times this season after doing it just three times all of last season. The Hokies are 13-1 under Fuente when scoring at least 40 points, the loss coming earlier this year by a 56-45 score at North Carolina.

Freeze has coached in Lane Stadium once before. He brought Arkansas State to Blacksburg, Virginia in 2011 and the Hokies defeated the Red Wolves 26-7.