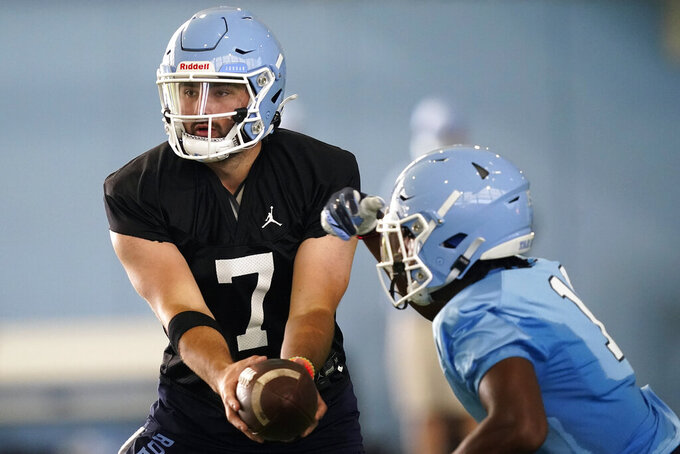 James Skalski has been looking forward to third-ranked Clemson’s opener against No. 5 Georgia on the same field where the Tigers maintain their Atlantic Coast Conference dominance.

“We usually end our regular season in Charlotte,” the Clemson linebacker said.

And there’s no reason to expect otherwise in 2021, either.

The Tigers are favored to win a seventh straight ACC championship in North Carolina’s largest city by December. They’re the headliner in a league that includes No. 10 North Carolina and No. 14 Miami as the only other teams in The Associated Press preseason Top 25 poll.

Clemson’s run of dominance has made the Tigers the first power-conference team to win six straight league title games. It’s also the longest run of ACC titles since Florida State won at least a share from 1992-2000 to start its stay in the league under late coach Bobby Bowden.

This year’s team has big names to replace – namely No. 1 overall draft pick Trevor Lawrence at quarterback and two-time ACC player of the year Travis Etienne at running back. That will mean plenty of attention on new starting quarterback D.J. Uiagalelei, who had big performances with Lawrence out briefly due to COVID-19 protocols last season.

If that continues into the season, the Tigers will be ready to celebrate in Charlotte, North Carolina again.

Atlantic: Clemson. The Tigers are 52-3 against ACC teams during their current reign, with only one of those losses – in 2017 at Syracuse – coming in its division.

Coastal: UNC. The Tar Heels start with a top-10 preseason ranking for the first time since 1997, which was the final season of coach Mack Brown’s first stint with the Tar Heels. They have 18 starters back on offense and defense.

“I like to take it with a tremendous amount of pride,” Brown said of high expectations. “Our fans can walk around right now with their chest stuck out because we’re a preseason top-10 team. I don’t take that as pressure."

Sam Howell, North Carolina: The junior quarterback is a candidate for the Heisman Trophy as well as to be one of the top NFL draft picks. He enters this year as the preseason ACC player of the year while powering UNC’s high-scoring attack, and Brown has already indicated this will be final season with the Tar Heels.

D.J. Uiagalelei, Clemson: Lawrence’s sophomore successor has size (6 feet, 4 inches and 250 pounds) and threw for nearly 800 yards in two midseason starts last year. “He’s a great leader and everybody has confidence in him,” Swinney said. “He makes everyone around him better.

D’Eriq King, Miami: The quarterback is returning for a sixth season despite suffering a serious knee injury suffered in last year’s bowl loss. He ranked in the Bowl Subdivision’s top 25 in total offense and passing efficiency.

Payton Wilson, N.C. State: The linebacker led the league at 10.8 tackles per game (13th in FBS) and was one of nine players nationally with at least 19 tackles in a game.

Thirteen of the 14 league teams have a returning quarterback with starting experience. The exception is Duke, which is set to turn to Gunnar Holmberg as the Blue Devils try to take better care of the football after committing an FBS-worst 39 turnovers last year.

The season marks a return to the two-division format as well as an eight-game league slate. The ACC last year brought Notre Dame – a football independent but a member in all other league sports – in for a year of division-less play and 10 conference games.

Virginia Tech is working on a new bowl streak after missing the postseason for the first time in nearly three decades. The Hokies opted out of the postseason last year, ending a 27-year run of bowl games and closing a five-win season in Justin Fuente’s fifth season.