No. 4 Michigan goes for its 7th straight win over Rutgers 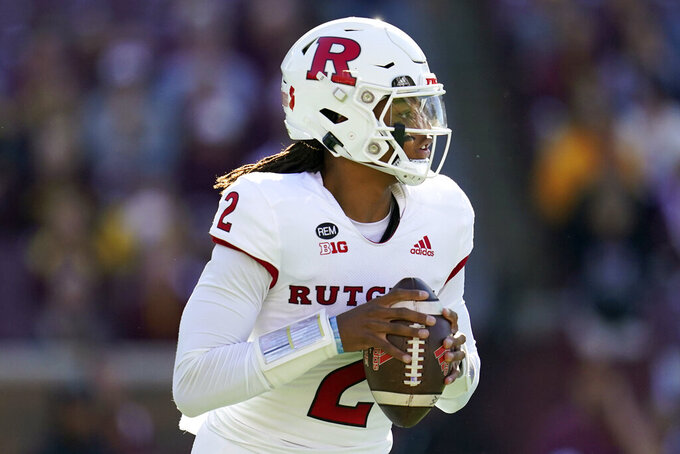 Rutgers quarterback Gavin Wimsatt looks to pass during the first half of an NCAA college football game against Minnesota, Saturday, Oct. 29, 2022, in Minneapolis. (AP Photo/Abbie Parr)

PISCATAWAY, N.J. (AP) — Greg Schiano has been coaching Rutgers long enough to know recent results against any team are not an indicator of what's going to happen in the next meeting.

So while the Scarlet Knights (4-4, 1-4 Big Ten) have dropped their last two games against No. 4 Michigan by a combined 13 points, it's wishful thinking to assume it's going to be close when the teams play Saturday night at SHI Stadium.

This is one of coach Jim Harbaugh's best teams. The Wolverines (8-0, 5-0) are in the hunt for the program's first national championship since 1997, and their second straight conference title. They're a powerhouse in all phases.

Rutgers is coming off an embarrassing 31-0 loss at Minnesota. There is no doubt Michigan has more talent.

“We have to play our style of ball,” Rutgers cornerback Avery Young said. “We have to chop. That's our culture. That's something that has to shine when you're playing a team as good as Michigan. If we do our jobs to the best of our ability, we have a chance.”

Harbaugh said playing Rutgers has been a challenge recently. The Wolverines won 20-13 last season and 48-42 in overtime in 2020.

“They’re a very physical team,” he said. “Defense, offense, special teams, very well coached. Same thing you say about a Greg Schiano team every time you go to play them.”

“I think ’20 and ’21 were their own years,” he said. “I think 2022 is this year and everything will be about what we do Saturday night. Those two games, that will be a dangerous trap to fall into.”

Michigan will get a chance to move on, one week after two of its players were roughed up in the Wolverines' stadium tunnel by Michigan State players. Starting cornerback Gemon Green suffered a concussion among other injuries, according to an attorney he retained, and reserve defensive back Ja’Den McBurrows has undisclosed injuries. Keeping the rest of the team focused on the task at hand this week has not been easy.

“It’s been a challenge,” said Harbaugh, who said he didn’t know if Green would play at Rutgers. “It’s been traumatic.”

Two weeks ago, the Scarlet Knights lost top rusher Samuel Brown to a season-ending foot injury. The freshman had 374 yards on the ground after breaking into the starting lineup. Freshman quarterback Gavin Wimsatt will take up some of the rushing slack but the main job falls to Kyle Monangai, who started the season as the No. 1 back. He has 212 yards rushing.

Harbaugh said he did not discipline running back Donovan Edwards for retweeting a post that included antisemitic remarks made by the embattled artist formerly known as Kanye West because Edwards acknowledged his mistake.

“He made a sincere apology, not only publicly but to our football team as well,” Harbaugh said. “He’s looking at it as a learning experience and a chance for growth as well.”

“I apologize for mistakenly retweeting a message that was so hurtful to so many especially those in the Jewish community,” he wrote last week.

Adam Korsak has been the Scarlet Knights' best player since 2018. The Australian punter has seen opposing returners held to minus-8 yards this season on his 41 attempts. He had a net average of 51.2 yards on five punts at Minnesota, including a stadium-record 77-yarder.

Michigan had some drives stall in the red zone against the Spartans, and in its previous game against then-No. 10 Penn State, but it has been able to rely on Lou Groza Award winner Jake Moody to make field goals. He is 9 of 9 in the last two games and overall this season he is 18 of 21, including a career-high 54-yarder last week.

“Not another kicker we’d rather have,” Harbaugh said.