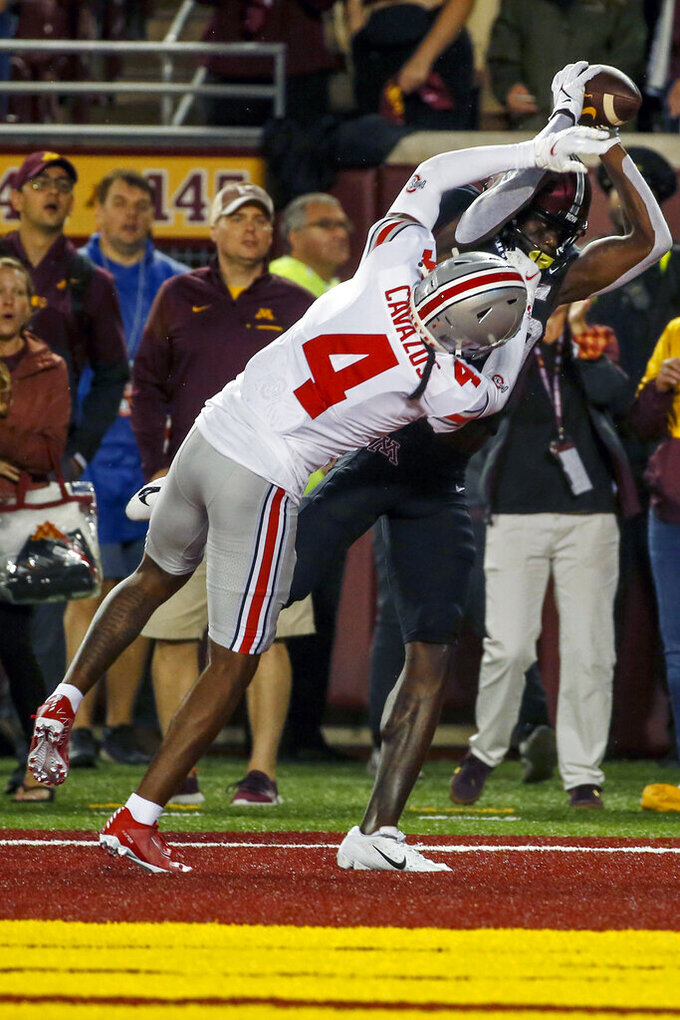 MINNEAPOLIS (AP) — C.J. Stroud's mind was not right as he sparred with first-game jitters, feeling “kind of all over the place" in his debut as Ohio State’s starting quarterback.

Playing for the Buckeyes comes with plenty of pressure. It also brings plenty of help.

Stroud passed for 294 yards and four touchdowns, and the fourth-ranked Buckeyes kept coach Ryan Day unbeaten in Big Ten play with a 45-31 victory over Minnesota on a rainy Thursday night.

Ohio State trailed at halftime (14-10) for the first time in a regular season game under Day, but time in the locker room was all Stroud needed to settle in. He passed for 246 yards in the second half.

“Everybody was encouraging me, telling me I can do it. My teammates all have belief in me,” said Stroud, who went 13 for 22 with one interception.

Said Day, who is 24-2 overall and 16-0 in conference games starting his third full year on the job: “We weren’t going to play it close to the vest. That’s not how we do it here.”

The Buckeyes flashed their five-star speed with two 70-plus-yard scores in the opener, one early on a run off right end by Miyan Williams and one late on a third-down screen to true freshman TreVeyon Henderson.

Chris Olave had touchdown catches of 38 and 61 yards, and Garrett Wilson scored on a 56-yard reception that gave Ohio State the lead for good at 24-21 midway through the third quarter. Less than three minutes later, Haskell Garrett grabbed a fumble from a strip-sack that Zach Harrison delivered on Tanner Morgan and ran it in for a 32-yard touchdown.

“I have great teammates, but I feel like I'm a great player, too,” Stroud said. “Maybe the first half didn't show that, but I did my best in the second.”

More painful for the Gophers than their fade down the stretch was the loss of star running back Mo Ibrahim, who hurt his lower left leg late in the third quarter and left the field in a walking boot.

The second team preseason Associated Press All-American had 30 carries for 163 yards and two scores, both giving the Gophers the lead and the first one after Terell Smith intercepted an off-target pass by Stroud that hit Olave's hand.

Coach P.J. Fleck had no update on Ibrahim's status afterward but said the bruising fifth-year running back from Baltimore, who moved into a tie for fourth place on the program's all-time list with his 33rd career touchdown, was in good spirits.

“Hopefully it's nothing major, but we don't know that just yet,” Fleck said.

The Gophers were probably never going to have a better opportunity to topple the mighty Buckeyes than this, fielding one of the most experienced teams in the country at home — and at night — to open the season against a newbie quarterback.

With fans allowed back in the seats at what's now called Huntington Bank Stadium, after the virus emptied them out for an abbreviated 2020 schedule, Minnesota enjoyed its third straight sellout dating to the Penn State and Wisconsin games in November 2019.

Already a time-of-possession team, the Gophers needed to play keep-away more than ever to make this a game. They were tentative at times but bold at others, including a fourth-and-1 play from deep in their own territory when Ibrahim ripped off a 56-yard run.

That set up a touchdown throw by Morgan to Texas A&M transfer Dylan Wright, who had five catches for 57 yards.

“I was really proud of how we responded,” Morgan said. “We've just got to keep responding and change our best.”

Ohio State had seven first-time starters on defense, with cornerback Sevyn Banks out injured and an all-new linebacker group getting broken in. That's where Garrett and Harrison come in.

“We've got to lead. We were picked as captains for a reason,” Garrett said.

The Buckeyes have won 12 straight games over the Gophers and 28 of 29 since their last loss at Minnesota in 1981. The Gophers last won in 2000, at Ohio Stadium.

Ohio State will surely at least stay put at No. 4 but likely would only move up if a top-three team stumbled badly on opening weekend.

Ohio State: For all their talent at wide receiver, size on the offensive line and depth at running back, the Buckeyes were still turning over their offense to a player who'd never attempted a pass in a college game so the succession from NFL first-round draft pick Justin Fields went about as smooth as could reasonably be expected. Luke Wypler filled in at center, too, for the injured Harry Miller.

Minnesota: Regardless of the outcome, this was the type of performance the Gophers were seeking in their attempt to get back on track after a frustrating 2020 season. The concern is a defense, buoyed by transfers and boasting seven players in their fifth year or more of college, that gave up way too many long gains, even against an NFL factory like the Buckeyes.

Ohio State: The Buckeyes return home to face No. 11 Oregon on Sept. 11.

Minnesota: The Gophers host Miami of Ohio on Sept. 11.