No. 5 Clemson, Goodwin have defensive issues to correct 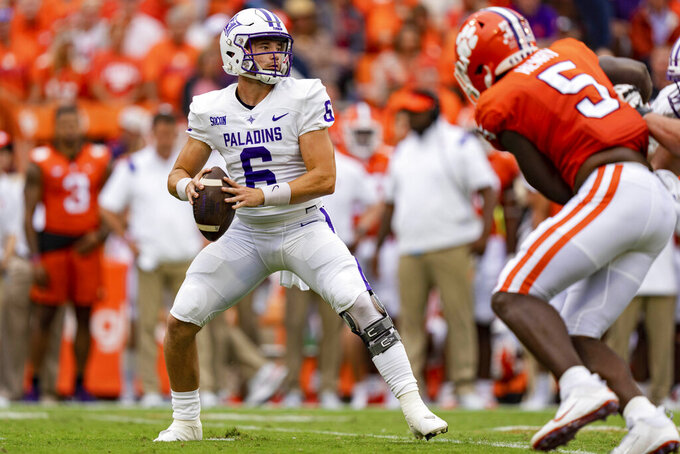 But Goodwin has plenty of things to fix after Furman of the Football Championship Subdivision outgained the fifth-ranked Tigers 386-374 in Clemson's 35-12 win on Saturday. They allowed the Paladins to go 10 of 18 on third downs a week after holding Georgia Tech to 237 yards and 2 of 16 on third-down conversions.

“You're coming free for a reason," Goodwin said of Clemson's rushers continually getting beat on screen plays. “So you've got to put on the brakes.”

The Tigers were largely set loose on Georgia Tech in the opener and contained quarterback Jeff Sims to 164 yards with an interception and two sacks. Tyler Huff, a Presbyterian transfer making his second start for Furman, connected on 31 of 40 passes for 259 yards and a touchdown. He, too, was sacked twice.

“Obviously, we did not play screens and the quick game well at all,” Clemson coach Dabo Swinney said. “Just a poor start. I did not like how we played defensively at all.”

Few had questions about Clemson's defensive prospects with so many talented, fiery, experienced players returning, like defensive ends K.J. Henry and Myles Murphy, and tackles in Bryan Bresee and Tyler Davis.

However, Davis missed the Furman game as a precaution after Swinney said he was “banged-up” earlier in the week. Goodwin did not know Monday if Davis could play Saturday night against Louisiana Tech.

Another wild card is Bresee, who's younger sister Ella was honored at Clemson last Saturday in her fight against brain cancer. Bresee went to his family's home in Maryland following the game when Ella had a setback. Goodwin did not know how long Bresee would be absent.

Tackle Ruke Orhorhoro, who started in place of Davis on Saturday, said the group's issues were all minor and correctable at practice.

“There (are) just a lot of little mental mistakes, just a lot of fixable stuff,” said Orhorhoro, a fourth-year junior. “Sometimes you need stuff like that to happen so, you know, your strong areas and your weak areas, just little mental stuff that we can fix as a whole.”

Clemson's defense had its moments against Furman. The Tigers got an interception by linebacker Barrett Carter to end a second-half drive and had a goal-line stand in the fourth quarter to end another Furman drive.

“Just responding to adversity, you want to see your guys rise to the occasion and I thought they did,” said Goodwin, who replaced longtime Clemson coordinator Brent Venables, now Oklahoma's head coach. “Good to see them show up and respond the right way.”

Cornerback Malcolm Greene is one of two new starters in the secondary this season following the departures of Andrew Booth and Mario Goodrich. Greene said the defense gave up too many quick throws and won't let that happen again.

“To see a guy wide open in a zone where you know somebody should be on them, it was really rough," Greene said. “But I know we have guys in the room that love to step up.”

Goodwin has seen his defenders bring a strong focus into each practice since spring and knows they'll do that this week in preparing for Louisiana Tech of Conference USA. Goodwin was even asked to weigh in on Orhorhoro's claim that the 6-foot-4, 295-pound defender was the best basketball player on the team.

“I got bigger things to worry about right now than basketball,” Goodwin said with a smile.