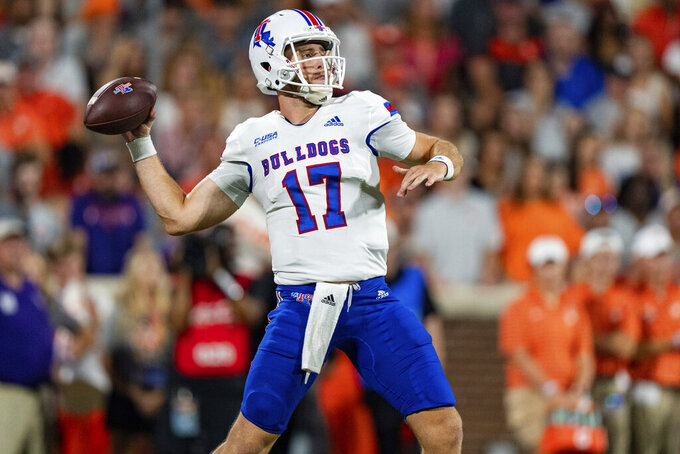 CLEMSON, S.C. (AP) — Will Shipley told his mother as a youngster there was one thing he loved above all else in football — scoring touchdowns.

Shipley's done that a bunch for Clemson this season in his impressive start. He added two more Saturday, along with a career-high 139 yards rushing, in the fifth-ranked Tigers' 48-20 win over Louisiana Tech on Saturday night.

“My favorite thing in the world is getting in the end zone,” Shipley said. “So any time that gets to happen, there's a huge smile on my face.”

The sophomore runner has six scores this season, two in each game. Clemson said, according to its records since 1950, he's the first Tiger to have multiple TDs in the first three games of the season.

And Clemson needed Shipley's burst and power to pull away from the Bulldogs (1-2) in the second half for its ninth straight win — and 36th in a row at home over the past seven seasons.

“We’re not a great team yet. Again, great teams don’t do some of the things we did tonight,” Swinney said. "But, man, these guys compete.”

The Tigers started 3-0 for the seventh time in eight seasons after shaking off a sluggish first half.

“I think we've got a bunch of guys who want to work and get better throughout the year,” Shipley said. “So, yeah, I'm very comfortable with where the offense is right now.”

Still, it took until the second half for the attack to get going.

Clemson, up just 13-6 at the break, took advantage of two Parker McNeil interceptions and fourth-down stop on Louisiana Tech's desperate gamble to stay in contention — all leading to touchdowns.

Clemson linebacker Jeremiah Trotter Jr. picked off McNeil on the Tech 32 and Shipley took the next snap into the end zone. Tigers cornerback Malcolm Greene intercepted McNeil on the next series after the Bulldogs reached the red zone.

Down 27-6, Tech and first-year coach Sonny Cumbie rolled the dice on fourth-and-2 at its 33-yard line. Marquis Crosby lost a yard as he was stuffed by defensive end Justin Mascoll and linebacker Wade Woodaz.

Uiagalelei found Beaux Collins for a 32-yard touchdown pass on the next play to put Clemson up by four touchdowns.

Shipley had a 2-yard touchdown in the opening half and became the first Clemson player in records going back to 1950 with two or more TDs in each of the first three games of a season.

Louisiana Tech's Cumbie said he knew going on fourth down deep in his territory was a risky move. But Clemson had scored two touchdowns in the previous eight minutes and he didn't want to put his defense back in so quickly.

“I think our players are fighting,” Cumbie said. “We've just got to be a little smarter in our execution.”

The Tigers, down two starters in the secondary and two on the defensive front, struggled in the opening half to get any pressure on McNeil or any solid coverage on his receivers in the “Air Raid” scheme.

Clemson's Uiagalelei passed for 221 yards and two TDs. He also rushed for 62 yards.

Louisiana Tech: The Bulldogs fell to 0-4 all-time against Clemson, yet gave the top-five Tigers several scary moments. Louisiana Tech scored two touchdowns in the fourth quarter to cut the lead to 34-20. The effort could mean big things when they start conference play. Plus, the school gets to take home $1.1 million for coming to Death Valley.

Clemson: The Tigers still have plenty to clean up. Their receivers had trouble getting separation, especially in the first half. But Clemson will be in most games with Shipley and Uiagalelei controlling things on the ground.

Clemson had a moment of silence for 15-year-old Ella Bresee, the sister of starting defensive tackle Bryan, who died of brain cancer earlier this week. Tigers coach Dabo Swinney coached in his “Ella Strong” T-shirt in honor of the teenager. Louisiana Tech coach Sonny Cumbie wore a similar T-shirt during pregame. Bryan Bresee was with his family in Maryland and did not play Saturday night. Each Louisiana Tech player wrote a letter of condolence to the Bresee family, which Swinney called a “beautiful thing.”

Clemson was without three other defensive starters due to injuries. Tackle Tyler Davis missed his second straight game as a precaution, Tigers coach Dabo Swinney said. Also out with injuries were safety Andrew Mukuba and cornerback Nate Wiggins.

Clemson: Jumps back into ACC play at No. 19 Wake Forest next Saturday.