No. 8 Oklahoma St. looks to stay sharp vs. Arkansas-PB 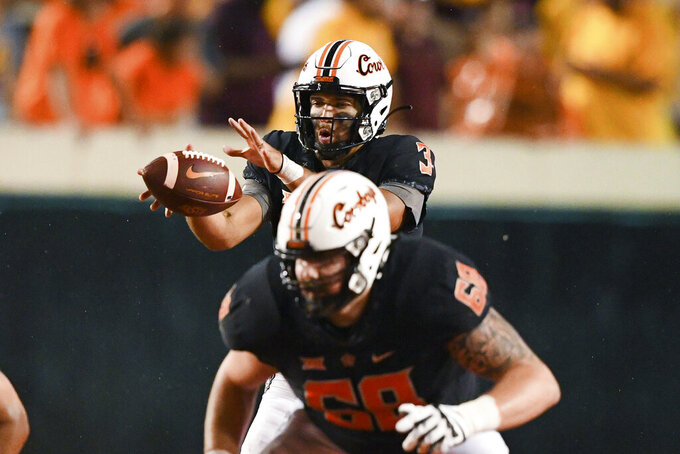 Oklahoma State wants to use Saturday’s game against Arkansas-Pine Bluff as a final tune-up before Big 12 play.

The eighth-ranked Cowboys are in strong position after opening the season with two wins, including a 34-17 victory over Arizona State last Saturday. But they have watched enough college football this season to know better than to overlook an opponent. Last week was littered with upsets, and Oklahoma State coach Mike Gundy doesn’t want to be another victim.

Pine Bluff is coming off a 76-3 win over North American, an NAIA program. It was the fourth-highest scoring total in Golden Lions history and the first time they have scored at least 70 points since 1990.

Pine Bluff’s Skyler Perry has passed for 434 yards and three touchdowns in two games. He completed 10 of 11 passes for 212 yards and two touchdowns against North American. He leads an offense that tops the FCS with 62 points per game.

“Sometimes that’s hard to do when you’re playing air,” Gundy said. “Our players are aware of that. They’ve got some guys that run around and make plays.”

“We’ve been good in each phase of it,” Pine Bluff coach Doc Gamble said. “We’re running the ball well, and that’s what we expect to do. And we’re throwing it at a high completion rate, which is always important for us. We’re hitting on all cylinders offensively."

Gundy's offense might welcome a shootout. The Cowboys are averaging 46 points and 498 yards through two games. Quarterback Spencer Sanders ranks third nationally in total offense with 392.5 yards per game.

Running back Dominic Richardson had 131 yards rushing and 44 yards receiving against Arizona State.

“He’s a big, physical runner," Gundy said. “He’s maturing some, we know that. He actually made some guys miss in space, which was encouraging. Arizona State had skill and so, I was encouraged by that.”

Overall, the Cowboys will be focused primarily on details and effort.

“We need to be held accountable for ourselves as individuals and our three units and then line up and go play hard,” Gundy said.

“You don’t get caught up into the letters and the facilities of all those things, then you've got a chance,” he said. “We've got to go play. I always refer back to last year’s game with the Razorbacks. At times, we looked like we were the Power Five football team at certain positions.”

Oklahoma State defensive end Trace Ford missed last season with a torn ACL, but he had a tackle for loss, a quarterback hurry and two pass breakups against Arizona State. Two years ago, he had 22 tackles, 4.5 sacks, four passes broken up, four quarterback hurries and two fumbles forced.

The Cowboys gave up 546 yards in the opener against Central Michigan, but recovered nicely and limited Arizona State to 354 total yards.

“I’m pleased with the improvements we’ve made from week one to week two, but those improvements aren’t to the point now that we can be successful for the remainder of the year,” Gundy said. "We need more improvements this week.”

Gundy, acknowledging the craziness of last week and how it relates to his approach: “I told the team that overall, on paper – whatever paper means, it didn’t mean a lot last week – but on paper, people are going to say you’re more athletic and a more talented team. I’m okay with that.”