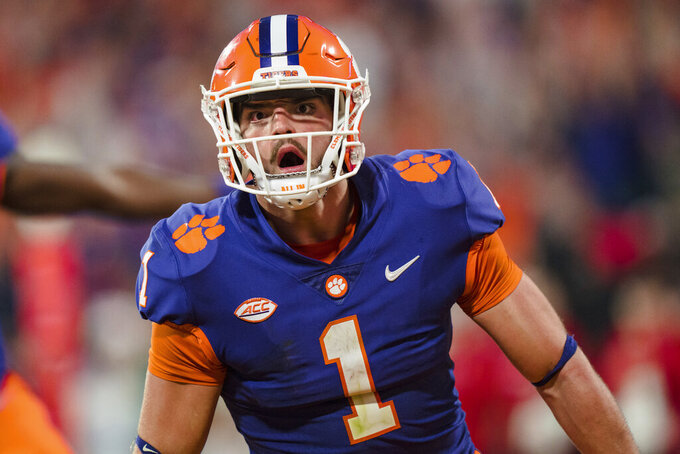 Clemson running back Will Shipley reacts after scoring a touchdown in the second half of an NCAA college football game against Louisville, Saturday, Nov. 12, 2022, in Clemson, S.C. (AP Photo/Jacob Kupferman)

Clemson is seeking its fourth perfect run through the ACC regular season since 2015 and first since 2019. The Tigers are also looking to extend their league-record 39-game home win streak. Miami, a top-10 team in August, is seeking bowl eligibility in coach Mario Critobal's debut season.

Miami QB Jacurri Brown vs. Clemson's defensive front. Brown was an on-target sparkplug who led the team to a 35-14 win over Georgia Tech last week. He threw for three touchdowns in his first college start. The Tigers accounted for four sacks in a 31-16 win over Louisville, pressuring quarterbacks Malik Cunninghan and Brock Domann nearly every play.

Miami: CB Kamren Kinchens leads the ACC with six interceptions and is third on the team with 39 tackles. The sophomore also returned one of his picks for a touchdown this season.

Clemson: RB Will Shipley has been the power that charges the Tigers offense. He's second in the ACC with 899 yards on the ground and 12 touchdowns.

Clemson has won an ACC-record 39 home games dating to 2016 (a 43-42 loss to PIttsburgh) A win and Clemson can tie Notre Dame’s 40 straight home wins from 1907-18 as the eighth longest such streak in FBS history.. ... Miami needs a win against Clemson or in its regular-season finale against Pitt next week to keep its run of .500 or better in ACC play going. The Hurricanes' last losing conference mark was 3-5 in 2014. ... The Tigers have gone undefeated in ACC play three times under coach Dabo Swinney, in 2015, 2018 and 2019. ... Clemson has won 10 or more games for the past 12 seasons. ... Miami has lost its last three to the Tigers, including the 2017 ACC title contest 38-3 in 2017. ... The Tigers have already clinched the ACC Atlantic and will face Coastal champion North Carolina in the championship game next month.