No. 9 Iowa seeks to bounce back as it visits Wisconsin 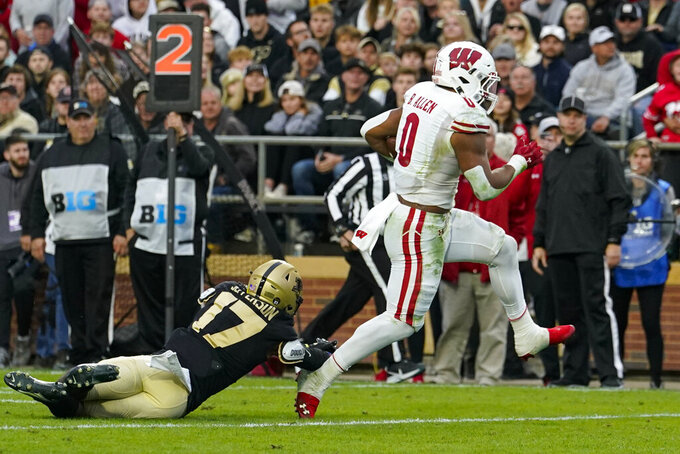 Wisconsin running back Braelon Allen (0) breaks way from Purdue safety Chris Jefferson (17) on his way to a touchdown during the second half of an NCAA college football game in West Lafayette, Ind., Saturday, Oct. 23, 2021. Wisconsin defeated Purdue 30-13. (AP Photo/Michael Conroy)

MADISON, Wis. (AP) — Just in case Iowa needed any additional motivation as it attempts to bounce back from its first loss of the season, the oddsmakers provided the Hawkeyes one more incentive.

The ninth-ranked Hawkeyes (6-1, 3-1 Big Ten) own a better record than Wisconsin (4-3, 2-2) and won 28-7 in last year’s matchup between these West Division rivals. Yet Iowa will head into Camp Randall Stadium on Saturday as a 3 ½-point underdog, according to FanDuel Sportsbook.

That line underscores how much impressions of the two teams have changed over the last couple of weeks, thanks largely to Purdue. Wisconsin won 30-13 at Purdue on Saturday, one week after Purdue won 24-7 at then- No. 2 Iowa.

This will mark Iowa’s first game since that lopsided loss to the Boilermakers.

“For now, it’s not (about) looking back at the past, but what we can still accomplish,” Iowa fullback Monte Pottebaum said. “Focusing on the future.”

Iowa is tied with Minnesota for first place in the Big Ten West and still has a shot at a playoff berth if it doesn’t lose again and wins the Big Ten championship game. But the Badgers also remain in control of their destiny in the West race now that they’ve’ won three straight games.

That adds to the stakes of this annual rivalry matchup between two teams that rely on playing quality defense and bruising their opponents.

“It’s a physical football game. That’s one area both teams pride themselves on. Who’s going to be the more physical team come Saturday?”

The biggest difference between these two teams is that Iowa thrives on takeaways while Wisconsin has been prone to giveaways.

Iowa leads all Bowl Subdivision schools with 21 takeaways. Marshall is the only FBS team averaging more turnovers per game than Wisconsin.

Wisconsin quarterback Graham Mertz has been picked off seven times this season and must be careful while facing an Iowa defense with an FBS-leading 16 interceptions.

“It’s a veteran group,” Mertz said. “They’re great with communication, playing together, playing off each other, and showing something pre-snap and rotating out of it post-snap.”

Wisconsin’s Chez Mellusi and Braelon Allen each rushed for at least 140 yards against Purdue. Allen has run for over 100 yards in three straight games. Mellusi has rushed for 692 yards this season.

“They run it for two, run it for three, then all of a sudden there goes that one, somebody doesn’t fit where they’re supposed to fit (and) these backs both find it really well,” Iowa coach Kirk Ferentz said.

Iowa won’t have cornerback Riley Moss for a second straight game. Moss, whose four interceptions put him in a tie for second place among all FBS players, is dealing with a knee injury.

Iowa still has Matt Hankins, who has picked off three passes.

Wisconsin linebacker Leo Chenal has been about as productive as any defensive player in the nation lately. Chenal has 26 tackles – 8 for loss – and 4 ½ sacks over his last two games.