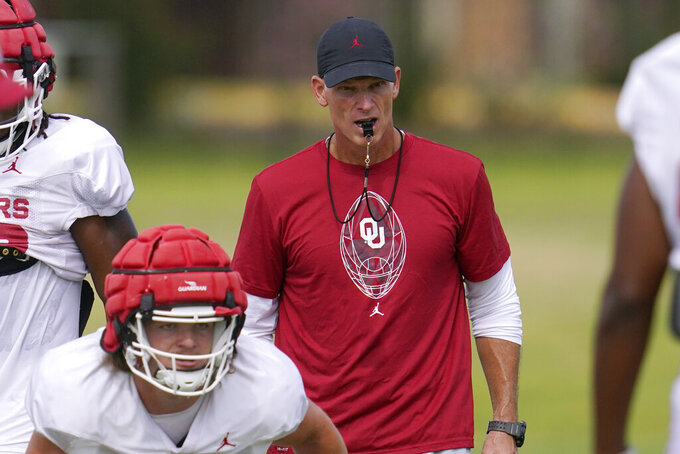 Line: Oklahoma by 30 1/2, according to FanDuel Sportsbook.

Oklahoma seeks a strong start under new coach Brent Venables. New offensive coordinator Jeff Lebby and new defensive coordinator Ted Roof are trying to establish themselves in a program where 41% of the roster is new and 52% has never taken a snap for the team. Even with all the new faces, the Sooners expect to be in the playoff hunt, so they can't afford to slip in their opener.

UTEP receivers Reynaldo Flores and Tyrin Smith vs. Oklahoma's secondary. Flores caught eight passes for 122 yards in the opening loss to North Texas and Smith caught seven for 127 yards and a touchdown. Oklahoma counters with an experienced secondary.

UTEP: QB Gavin Hardison. The veteran passed for 293 yards and rushed for 29 in the opener. His 3,217 yards passing last season were fifth on the school's single-season list.

Oklahoma: QB Dillon Gabriel. The transfer from Central Florida has passed for 8,037 yards and 70 touchdowns in his career, but it will be his first start for the Sooners.

Venables has coached in eight national championship games as an assistant coach and won three. ... Oklahoma RB Eric Gray is poised for a big season after gaining 412 yards rushing and 229 yards receiving last season. ... Oklahoma defeated UTEP 56-7 in 2017. ... UTEP WR Walter Dawn had 56 yards receiving and scored a touchdown for the Miners against Oklahoma in 2017. ... Oklahoma is in the preseason top 10 for the seventh consecutive year. ... Both Venables and UTEP coach Dana Dimel are former Kansas State assistant coaches.