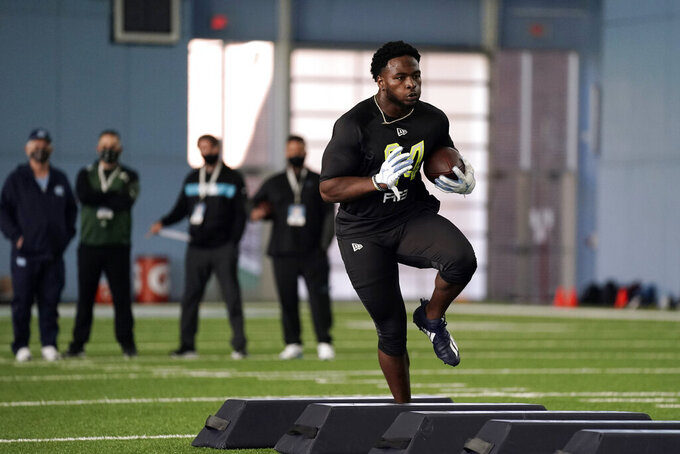 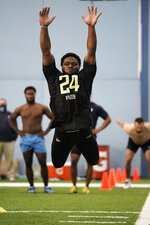 Michael Carter looked around at North Carolina’s pro day and the Tar Heels running back was proud not only of where the program has come from since he arrived in Chapel Hill, but where he’s sure its headed.

The opportunity to see Carter, fellow running back Javonte Williams, wide receivers Dyami Brown and Dazz Newsome and linebacker Chazz Surratt go through drills brought 31 of the NFL’s 32 teams to the workouts. Retired Pro Bowl wide receiver Steve Smith, who was in town for a few days, also came out.

“I think it just means a lot to have the NFL Network out here,” Carter said after completing his workout. “And especially Steve Smith, just because it kind of shows the trajectory of the program.”

Carter made sure to give former coach Larry Fedora credit because he recruited the five players, but it was in the past two seasons under Mack Brown that the Tar Heels flourished as an offensive powerhouse. After winning just two games in Fedora's final season, North Carolina has gone 15-10 under Brown.

By Carter’s estimation, the improvement will only continue.

So are he and his former teammates who showcased their talent for NFL evaluators.

Carter led the Tar Heels with 1,245 rushing yards and scored nine touchdowns last year, and Williams, more of a bruising runner, ran for 1,140 and 19 touchdowns, third most in the Bowl Subdivision.

In their workouts, Carter was timed at 4.5 seconds in the 40-yard dash, and Williams was timed at 4.55 seconds. Carter agreed that having those numbers factor into how scouts evaluate you seems odd when plenty of film exists.

“I feel like there’s so many custom movements during a football game that it’s not too often you run the straight line for 40 yards, especially in the NFL,” he said. “Because guys are all the same speed. So it’s about can you make that man miss? Can you win your one on ones?”

One reason for Carter’s optimism about the Tar Heels’ future is quarterback Sam Howell, a likely Heisman contender in 2021. He has thrown for 68 touchdowns in two years.

Howell was throwing the passes to his former teammates as scouts looked on Monday. Among those on the receiving was Brown, a speedster who had 2,133 yards and 20 TD catches his last two seasons, and Newsome, who had 1,702 yards and 16 TDs.

Smith, in a conversation with Brown, advised the wide receiver not to worry about running deep routes because he's already shown that he can do it.

“He told me to work on medium stuff, things that I haven't done,” Brown said.

Mack Brown paid tribute to the five in a Zoom call looking ahead to the workouts.

“They can leave here with a tremendous amount of pride, because they came into a program that had won five games in two years,” the coach said, “and they’re leaving with a program that in some areas will be rated in the top 10 in preseason next year.”

The combination of the running backs, who also were effective catching the ball, the speedy receivers on the outside and Howell's accurate passing made North Carolina hard to stop. They averaged 41.7 points in the 2020 season, finished 8-4 and played in the Orange Bowl, losing 41-27 to Texas A&M.

That, Mack Brown said, was the good news.