Oklahoma and Oregon meet in Alamo Bowl with interim coaches 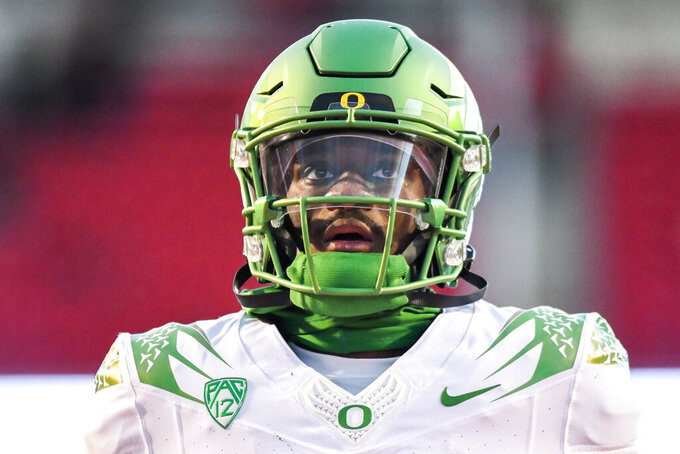 Line: Oklahoma by 7, according to FanDuel Sportsbook.

The Sooners and Ducks both want to make a splash with interim coaches before new staffs arrive in 2022. The Sooners have former coach Bob Stoops on the sideline after Lincoln Riley's departure for Southern California. Former Oklahoma assistant and Clemson defensive coordinator Brent Venables will lead the Sooners next season. Oregon offensive assistant Bryan McClendon will be the interim coach for the Ducks after Mario Cristobal left for Miami. Georgia defensive coordinator Dan Lanning arrives at Oregon after the College Football Playoff.

Oklahoma running back Kennedy Brooks vs Ducks linebacker Noah Sewell. Brooks averages 113 yards rushing per game and is just the fourth Sooner to rush for 1,000 in a season three times. Sewell ranks No 2 in the Pac-12 with 106 tackles and is the first Ducks player with 100 stops in a season since 2018.

Oklahoma: QB Caleb Williams. The standout freshman has yet to say anything definitive about whether he will stay for 2022, but the fact that he's in uniform and playing is the most hopeful sign yet for Sooners fans. In the seven games since taking over the offense, Williams has passed for 18 touchdowns. He also has touchdown runs of 74, 66, 41 and 40 yards.

Oregon: Edge rusher Bradyn Swinson. The Ducks need an impact player up front with All-American Kayvon Thibodeaux skipping the bowl game to prepare for the NFL draft. Swinson had a big game in a season-opening win against Ohio State when Thibodeaux was out with an injury.

FACTS & FIGURES: Oklahoma will be missing four defensive starters who chose not to play while preparing for the NFL draft ... Oregon led the Pac-12 in third-down conversions at 51.5% ... The Sooners are making their Alamo Bowl debut after missing a New Year's Six bowl for the first time since 2014 ... Oregon's last appearance in the Alamo Bowl was a triple-overtime loss to TCU in 2016 when the Ducks surrendered a 31-0 lead.