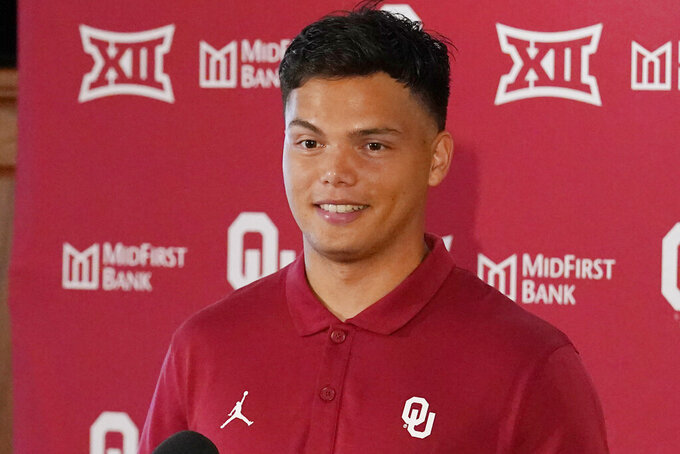 Gabriel, a transfer from Central Florida who took part in spring practice, was busy showing his teammates around the state last month. He got his offensive playmakers together at a ranch in Lawton and took his offensive linemen to Lake Thunderbird, among other things.

The efforts were needed because the Sooners have a new coaching staff, and new coach Brent Venables said 40% of the roster has never taken a snap for the team. Some of the most experienced players have come via the transfer portal.

Gabriel simply saw a need and filled it.

Gabriel's goal was to create stability as the Sooners prepare for their opener on Sept. 3, at home against Texas-El Paso. That will be Oklahoma's first game since coach Lincoln Riley left for Southern California and several players, including quarterbacks Caleb Williams and Spencer Rattler, later transferred.

Lebby said Gabriel has fit in nicely since transferring.

“I think the thing that he’s done is he’s been exactly who he is,” Lebby said. “He’s been very intentional on creating relationships and making sure everybody in the locker room knows who he is as a person. He’s done a great job of that.”

Defensive coordinator Ted Roof, who followed Venables from Clemson, said the next step — creating trust on the field — should be easier after Gabriel's efforts.

“I think getting to know one another — that is so critical for any organization, but especially a football team,” Roof said. “Because when you get to know one another and watch each other specifically work, then you can respect a guy. You can fight for that man.”

Still, Roof expects there to be challenges the first year.

“Yeah, there is a newness,” he said. “Every day gets a little bit better. But certainly as you go through Year 1 of most staffs, but you know what, you’re always learning. If you’re not learning, you’re falling behind, whether it’s Year 36 or Year 2. So that part of it, we’re trying to learn every day.”