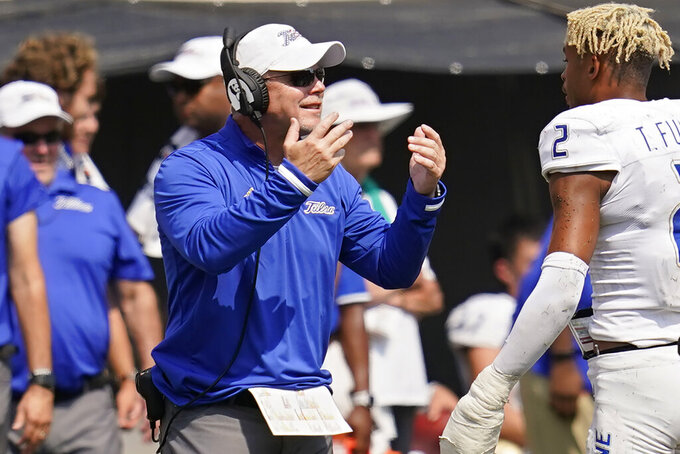 Tulsa head coach Philip Montgomery gestures to his team during a timeout in the second half of an NCAA college football game against Oklahoma State, Saturday, Sept. 11, 2021, in Stillwater, Okla. (AP Photo/Sue Ogrocki)

The Cowboys trailed 14-7 entering the fourth quarter, but took control of the nonconference game with a Spencer Sanders touchdown throw, LD Brown’s 98-yard kickoff return for a score and Warren’s late run.

“I was proud of our defense for continuing to put us in a great situation,” Oklahoma State coach Mike Gundy said. “… They continue to play well, as we try to grow up a little bit on offense and get some young players developed and kind of work through a few things.”

Tulsa, which fell to FCS program UC Davis last week, looked poised to beat Oklahoma State for the first time since 1998 and win its first game in Stillwater since 1951.

The Golden Hurricane forced a 7-7 tie at halftime, courtesy Justin Wright’s 55-yard interception return for a touchdown late in the second quarter. Tulsa couldn’t overcome the Cowboys’ fourth-quarter explosion, even after adding a touchdown with 3:06 to play. OSU recovered an on-side kick and ran out the clock.

Similar to its narrow victory over Missouri State last Saturday, Oklahoma State’s offense struggled to find its footing, even with its starting quarterback back in the lineup.

Sanders, who missed the team’s season opener, finished with 173 passing yards on 15-of-26 passing to go with two touchdowns and an interception.

“I think everybody in this building is going to tell me I played good,” Sanders said, “but I’m gonna honest with myself, I got to play better.”

Sanders and Oklahoma State’s running backs dealt with plenty of pressure from Tulsa’s defensive front. The Golden Hurricane recorded nine tackles for loss, including two sacks and hurried Sanders on three other occasions.

Perhaps Sanders’ most important play came on a third-and-long run for nine yards that allowed the Cowboys to run out the clock on their final three plays.

Tulsa quarterback Davis Brin had 224 yards passing on 19-of-27 passing. Deneric Prince and Anthony Watkins each had a rushing touchdown in the loss.

Tulsa had its chances late but couldn’t capitalize on a long drive that ended with a 20-yard field goal and had a late fumble recovery overturned after officials reviewed the play that would have prevented Oklahoma State’s final touchdown.

Oklahoma State’s offense sputtered often for a second consecutive week, but its defense continued to provide its offense with a safety net.

Oklahoma State receivers Braydon Johnson and Tay Martin were unavailable for most of Saturday’s game, forcing the Cowboys to turn to Bray, a freshman, and sophomore Brennan Presley for most of its receiving production.

The Cowboys also leaned on freshmen Green and John Paul Richardson to provide an offensive spark.

“To have them make the plays that they did was huge. We needed it,” Oklahoma State offensive coordinator Kasey Dunn said. “… And they’ll only get better.”

Oklahoma State plays its first road game of the season on Saturday with a trip to Boise State.