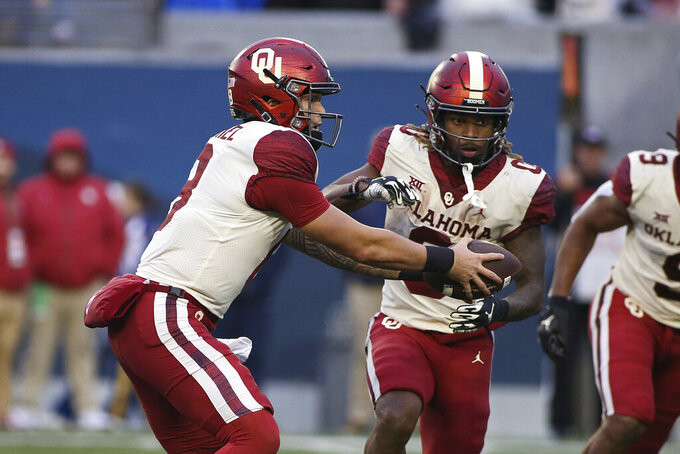 Oklahoma quarterback Dillon Gabriel (8) hands the ball off to running back Eric Gray (0) during the second half of an NCAA college football game against West Virginia in Morgantown, W.Va., Saturday, Nov. 12, 2022. (AP Photo/Kathleen Batten)

This will be one of the last Big 12 games between longtime rivals Oklahoma and Oklahoma State. Oklahoma is slated to leave for the Southeastern Conference within a few years. A win would keep No. 24 Oklahoma State in contention for a spot in the Big 12 title game. The Cowboys have three conference losses. Kansas State is alone in second place with two league losses. Oklahoma would become bowl eligible with a win and would salvage something from a disappointing season.

Oklahoma QB Dillon Gabriel vs. Oklahoma State pass rush. Gabriel has put up solid numbers this season and is dangerous when he has time. Oklahoma State is one of the best teams in the Big 12 in pressuring the quarterback.

Oklahoma State: QB Spencer Sanders. He has missed time this season with a shoulder injury, but he said he expects to play. He leads the Big 12 with 290 yards of total offense per game. He's been a threat as a runner, with 351 yards and eight touchdowns on the ground. How much he runs might depend on his health.

Oklahoma: RB Eric Gray. He ranks third in the Big 12 with 1,113 yards rushing this season, and his 6.7 yards per carry lead the conference and rank sixth nationally. He also has 189 yards receiving. Oklahoma State allows 163.1 yards rushing per game — seventh among the 10 Big 12 teams.