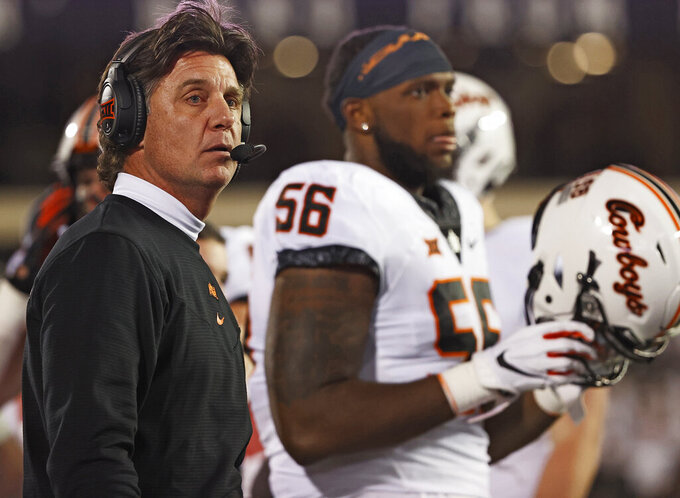 Line: Oklahoma State by 4 1/2, according to FanDuel Sportsbook.

Both teams have an outside shot at a berth in the College Football Playoff. Oklahoma State has already clinched a spot in the Big 12 title game, but a loss would end the Cowboys' national title hopes. Oklahoma has won six straight Big 12 titles, but would be out of the conference title game with a loss to Oklahoma State and a Baylor win over Texas Tech on Saturday.

Oklahoma: RB Kennedy Brooks. He's one of the most productive backs in the nation, but the game plan sometimes goes away from him. He needs 28 yards to become just the fourth Oklahoma running back to post four 1,000-yard seasons. The others are Samaje Perine, Adrian Peterson and De'Mond Parker.

Oklahoma State: LB Malcolm Rodriguez. He's tied for the Big 12 lead with 8.7 tackles per game and spearheads a unit that has allowed just one defensive touchdown the past four games. He has forced three fumbles and recovered two.

This is just the third meeting between the teams when both are ranked in the top 10. ... Oklahoma State coach Mike Gundy has a 2-14 record against Oklahoma. ... The 20 combined wins for the Sooners and Cowboys are tied for the most ever entering a Bedlam game. ... Oklahoma has won six straight in the series. ... Oklahoma State is sixth nationally in fourth-down defense.