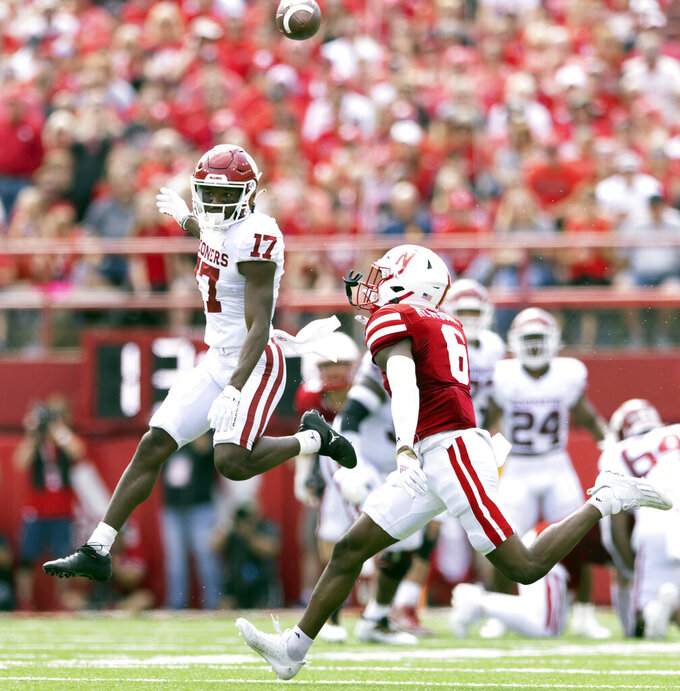 Oklahoma's Marvin Mims Jr. (17) misses a pass while under pressure from Nebraska's Quinton Newsome (6) during the first half of an NCAA college football game Saturday, Sept. 17, 2022, in Lincoln, Neb. (AP Photo/Rebecca S. Gratz)

NORMAN, Okla. (AP) — Oklahoma coach Brent Venables always has spoken highly of Kansas State, where he played linebacker and got his coaching start as an assistant under Bill Snyder.

He will face the Wildcats as head coach for the first time on Saturday, and he’s focused solely on getting the win for his sixth-ranked Sooners (3-0) in the Big 12 opener for both teams.

“I know I’m the head coach, but getting ready for a game is the same,” Venables said. “I look at the scheme and the DNA more than I do at the logos. All the other dynamic things that are interesting everyone else are not interesting to me, with all due respect.”

“I reflect about my opportunities and my relationships all the time,” he said. “When I think about Kansas State, I go back to when I played there, the mentors I had and the wonderful experience I had there in Manhattan. But it’s a long time ago.”

He even spoke to the 82-year-old Snyder after last week’s 49-14 win at Nebraska.

“After the game, he said, ‘Great job getting No. 3, now go get No. 4,’” he said. “Maybe an hour later, he said, ‘Except not this week.’ He must have checked the schedule. He said, ‘Not against us.’ I love the loyalty. No surprise. Amazing man.”

“There’s not enough guys from 2020,” he said. “And that was such a strange year. I mean, there was nobody in the stands at all. Some of our guys just being there (in 2020) I think, will help. But it’ll be a different crowd this year.”

Even though Kansas State is coming off a surprising 17 -10 loss to Tulane, Klieman has a positive outlook.

“I know we’re going into a tough situation, guys, as far as coming off a loss and going against Oklahoma, who’s a terrific football team,” he said. “We need to continue to get better and have an opportunity in the fourth quarter to win the game.”

Oklahoma faced Kansas State quarterback Adrian Martinez when he was at Nebraska last year, and he passed for 289 yards and a touchdown in a 23-16 loss in Norman.

Martinez has passed for 304 yards and a touchdown with no interceptions this season in three games. Klieman said he’s being too careful.

“He would agree that he’s got to cut it loose and rip it,” Klieman said. “And if a mistake’s made, a mistake’s made. But be aggressive in what you see and what you believe. And we’ve seen that in fall camp and now we’ve just got to see it on a Saturday.”

Klieman said linebacker Shawn Robinson stepped away from the team for personal reasons and was not kicked off the team. Robinson never played after transferring from Missouri.

“I’ve got really good respect for that young man, and it was not a bad situation,” Klieman said.

Oklahoma leads the nation with 32 tackles for loss and ranks fourth in sacks under first year coordinator Ted Roof. The Sooners rank 14th nationally in scoring defense, allowing an average of 10 points per game.

“I think our guys, with the level of buy-in, they’re seeing some of the fruits of their labor pay off, as far as creating negative-yardage plays, because, that’s such a big deal in football now,” Roof said.

Kansas State’s Deuce Vaughn ranks 28th nationally in all purpose yards with 129.3 yards per contest. He has rushed for 352 yards and three touchdowns and has 36 yards receiving.

“They get very creative in how they get him the ball,” Roof said. “We have a lot of respect for him. He’s one of the best backs in the nation, and we know it’s a great challenge for our guys.”

Oklahoma’s Marvin Mims ranks 17th nationally with 143.7 all purpose yards per game. He leads the Sooners with 14 catches for 310 yards and two touchdowns. He also has 118 punt return yards.

Oklahoma quarterback Dillon Gabriel has passed for 759 yards and seven touchdowns in three games, and he has yet to throw an interception. He's also rushed for 65 yards and two touchdowns, including a 61-yard scoring run against Nebraska.