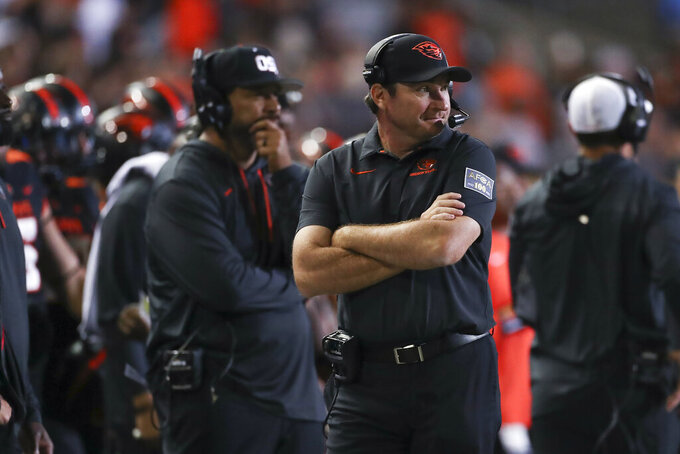 Oregon State is 2-0 for the first time since 2014, coming off wins over Boise State and Fresno State. The game is being played at Providence Park, home of Major League Soccer's Portland Timbers and the Portland Thorns of the National Women's Soccer League. Oregon State hasn't played in Portland since 1986, when the Beavers faced UCLA. Montana State is coming off a 63-13 victory over Morehead State in Bozeman. Montana State’s last victory over an FBS team came in 2006, when the Bobcats beat current Pac-12 member Colorado 19-10.

Oregon State's defense had a big opener against Boise State, with five takeaways, including three interceptions. The D will face a challenge with Montana State, which uses two quarterbacks, Tommy Mellott and Wyoming transfer Sean Chambers. “It’s dangerous. It’s tough to defend when they can throw it and the quarterback can run the ball, which they present problems that way," Beavers coach Jonathan Smith said.

Oregon State: Two-way player Jack Colletto, who plays at inside linebacker and running back. In the victory at Fresno State he stepped in as a wildcat quarterback and popped into the end zone for the game-winning touchdown.

Oregon State is 7-for-7 in the red zone this season ... Montana State freshman running back Jared White injured his lower leg in the game against Morehead State and won't be available for at least a "couple of months," coach Brent Vigen said. MSU is thin at running back, with Isaiah Ifanse, who racked up 1,623 yards and 10 touchdowns last season, also set to miss Saturday's game. ... Bobcat safety Jeffrey Manning Jr. played at Oregon State for two seasons before transferring to Montana State in 2020. ... Oregon State tight end Luke Musgrave and running back Trey Lowe will miss Saturday's game because of unspecified injuries.