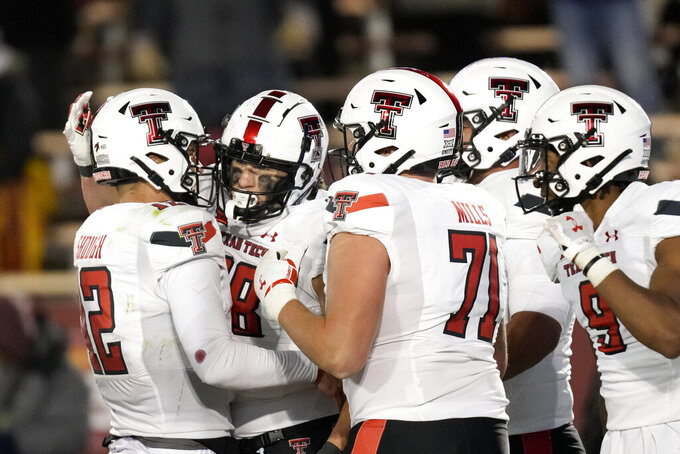 It's the regular-season finale in the debuts of both first-time college head coaches: Oklahoma's Brent Venables and lifelong Texan Joey McGuire at Texas Tech. While both teams are bowl eligible, it was a disappointing year for Venables and the Sooners. They were ranked as high as sixth before turning into also-rans in the Big 12. The Red Raiders can end a 10-game losing streak against the Sooners and clinch a winning conference record for the first time since 2009.

Tyler Shough vs. Oklahoma defense. The Texas Tech QB has missed most of the season with a shoulder injury, and the Red Raiders are coming off a season-low 246 yards in a 14-10 win over Iowa State. Shough led two long scoring drives despite the offense's struggles. Venables won a national title as defensive coordinator at OU before getting two more in that role at Clemson. But his reputation hasn't followed him back to Norman. The Sooners have the second-worst defense in the Big 12.

Oklahoma: RB Eric Gray had a four-game run of 100-yard games stopped in a 90-yard effort in last week's 28-13 win over rival Oklahoma State. Gray did have a touchdown against the Cowboys, extending his TD streak to five games. Gray is season in the Big 12 at 109 yards rushing per game. The Sooners lead the conference and rank 13th nationally at 217 yards rushing per game.

Texas Tech LB Tyree Wilson is skipping his final season of eligibility and declaring for the NFL draft. He sustained a season-ending foot injury two weeks ago against Kansas. ... Oklahoma is averaging 52 points, 594 total yards and 264 rushing yards during the 10-game winning streak in the series. ... The 14 points for the Red Raiders at Iowa State were their fewest in a road victory since a 13-10 win at Texas A&M in 1996. ... The Sooners can clinch a winning record with a victory. OU is the only Power Five school without a losing season since 1999.