Pick your poison against Kiffin's No. 7 Ole Miss offense 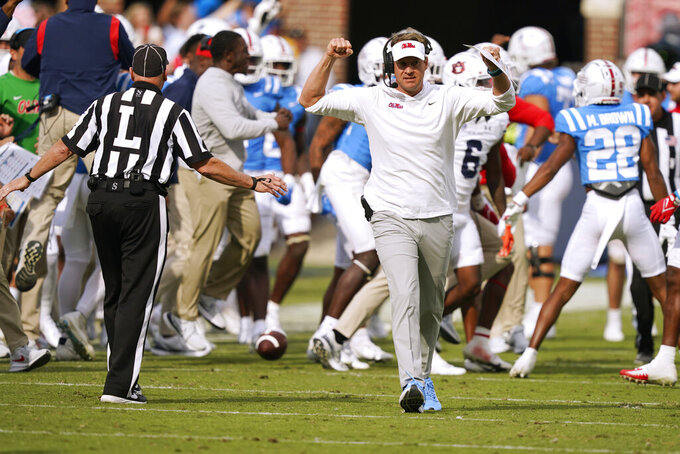 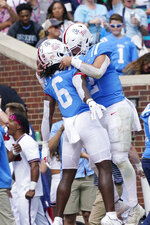 One week, Mississippi zapped Vanderbilt for 448 passing yards. The next, the seventh-ranked Rebels bulldozed Auburn’s defense for the same number of yards on the ground.

Opponents, including LSU on Saturday, don’t always know which facet of the Rebels offense will be featured on that particular day. Advantage, Ole Miss.

“Every game’s independent,” Ole Miss coach Lane Kiffin said. “Every game plan is different every week. I think we’re a little unique that way in that you don’t ever know what you’re going to see when you play us.

“We don’t just run a system. We change a lot, obviously, year to year but even week to week. We just always try to give our players the best chance to win.”

Ole Miss had three 100-yard rushers against Auburn. The 448 rushing yards were the most for an Ole Miss team since 1962, fifth-most all-time and second-most against a Southeastern Conference team. The Rebels had run for 515 yards against Auburn in 1951, a school record that still stands.

The latest rushing outburst came a week after Jaxson Dart passed for 448 against Vanderbilt and Jonathan Mingo set a school record with 247 receiving yards. Dart ran for 245 yards against Auburn and passed for three touchdowns.

“It’s an offense that is systematic in its playcalling,” LSU coach Brian Kelly said. "What they’re trying to do, the pieces fall together quite nicely. And very talented. You know, the quarterback is a true double threat quarterback. Dart can throw it, he can run, he’s complementary with two outstanding backs, big receivers and a very balanced attack that can run it equally as well as they throw it.”

The offense has more typically been powered by running backs Quinshon Judkins and Zach Evans and the nation’s No. 3 rushing offense (271 yards per game). They’ve helped make up for the loss of star passer Matt Corral to the NFL.

Judkins and Evans have upgraded a running game that lost its top three backs. Judkins is the SEC's No. 2 rusher with 720 yards and Evans is fourth at 605 yards.

Kiffin's reputation is more for his work with quarterbacks and passing games. But he was Alabama's offensive coordinator when Derrick Henry rushed for an SEC-record 2,219 yards and 23 touchdowns on his way to the 2015 Heisman Trophy.

Then there’s Dart, a USC transfer whose battle for the starting job with Luke Altmyer carried over into the season. He has thrown for 1,488 yards and 11 touchdowns, six of them in the past two games. Dart has also been intercepted six times.

Ole Miss receiver Dayton Wade said he is “really, really confident” that the Rebels can win with Dart's arm even if the running game stalls.