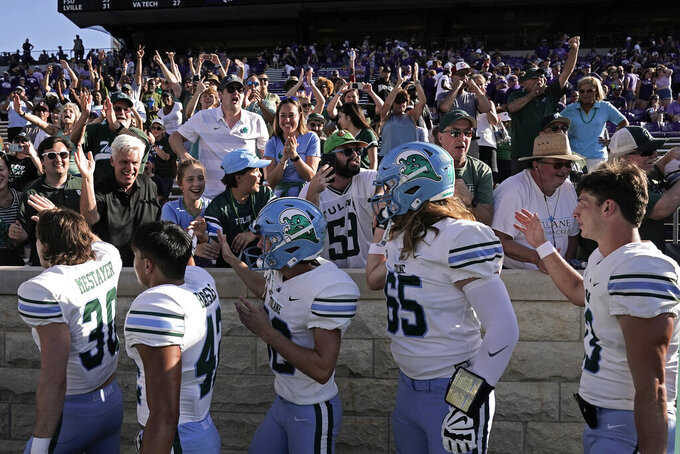 MANHATTAN, Kan. (AP) — Michael Pratt only cared about one stat — the final score.

“It doesn’t really matter what my stats are,” Pratt said. “I could have gone zero for 20 with five interceptions. If we win the game, that’s all I care about.”

K-State came into the game favored by two touchdowns.

The Green Wave stopped the Wildcats on fourth-and-short twice in the third quarter and again in the fourth prior to the game-winning drive. K-State finished 1 for 5 on fourth down.

“The front seven was amazing,” defensive back Macon Clark said. “They did a great job. We wouldn’t have won without them.”

It was Tulane’s first road victory over a Power-5 conference school since beating Rutgers in 2010. Rutgers was part of the Big East that season.

Fritz showed confidence in his team late in the fourth quarter. Leading by seven points and facing fourth down and less than a yard on their own 29, Fritz kept Pratt and the offense in the game. Pratt gained 2 yards and iced the victory.

“We’d better get it,” Pratt said of the decision. “I talked to the O-line and said, ‘This is one play where you guys have to do whatever you can to finish the game. I knew I had to get it; there’s no other option.”

The two teams came into the game having allowed a combined total of 22 points in two games. It was the second meeting between the two schools. Tulane came from behind to defeat K-State 20-16 in 1988, the year before coach Bill Snyder took over the Wildcats’ program.

Pratt was 13-of-26 passing with a touchdown and two interceptions, but came up big in the clutch for Tulane (3-0). He also had a career high with 87 rushing yards.

“That was a huge part of our game plan,” Pratt said. “They were going to rush three and drop eight to take away the pass. I knew I had to run the ball. I didn’t necessarily think it was going to be that much, but when opportunities present themselves you have to take advantage of them. I think I did.”

Adrian Martinez was 21-of-31 passing for 150 yards and a touchdown for Kansas State (2-1). Running back Deuce Vaughn was held to 81 yards on 20 carries, the first time in nine games that he’s been held to fewer than 100 yards rushing. He was held out of the end zone for the first time in 10 games.

“Teams are going to key on Deuce because he’s a special player,” Kansas State head coach Chris Klieman said. “We’ve got to ways to get the ball to Malik (Knowles) and Phil (Brooks) and Kade (Warner) and those guys, and let them have opportunities with the ball in space. We’ve got to be more efficient.”

Tulane grabbed the early lead on a 91-yard, nine-play drive, capped by a 1-yard run by Tyjae Spears. The Green Wave controlled the first quarter, out-gaining the Wildcats 125-46, even going against a strong wind.

Kansas State tied it with 2:43 left in the second quarter on a 21-yard touchdown pass from Martinez to his former Nebraska teammate Warner. That touchdown capped an eight-play, 75-yard drive.

Tulane appeared to be marching toward a go-ahead score late in the quarter when Daniel Green picked off Pratt’s pass at the KSU 28-yard line. He returned it 49 yards to the Tulane 23. A 22-yard field goal by Chris Tennant on the final play of the half gave K-State a 10-7 lead.

“We talk about four-point plays,” Fritz said. “We were happy giving up a field goal at that point in the game.”

Tulane opened the second half scoring with a 30-yard field goal by Kriston Esnard to tie the score at 10.

Tulane: The Green Wave proved that their 94-10 point differential in the first two games against lesser opposition was no fluke. They went toe-to-toe against the Wildcats, holding their best player to well below his season average.

Kansas State: The Wildcats hadn’t shown much on offense the first two games this season, but the defense was good enough that it didn’t matter. But the offensive struggles are very real.

Tulane: The Green Wave complete the non-conference portion of their schedule by hosting Southern Mississippi on Saturday.

Kansas State: The Wildcats travel to Norman, Okla., to take on undefeated Oklahoma on Saturday in the Big 12 opener for both teams.