Report finds 'no racist intent' behind song 'Eyes of Texas' 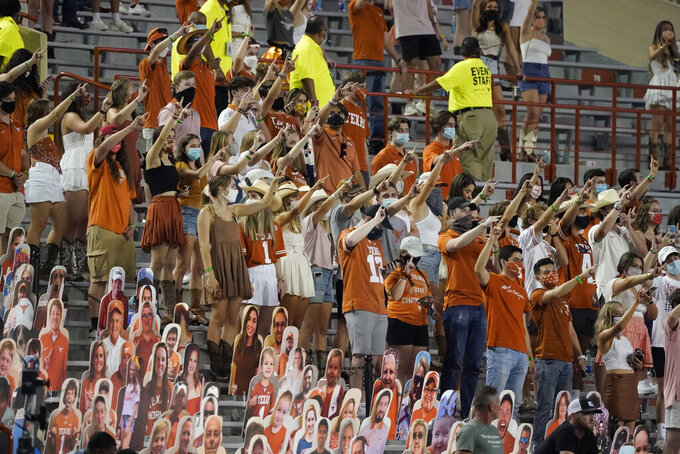 FILE - In this Saturday, Sept. 12, 2020, file photo, fans join in singing "The Eyes of Texas" after Texas defeated UTEP 59-3 in an NCAA college football game in Austin, Texas. The University of Texas' long-awaited report on the history of the school song “The Eyes of Texas” found it had “no racist intent,” but the school will not require athletes and band members to participate in singing or playing it at games and campus events. The song had erupted in controversy in 2020 after some members of the football team demanded the school stop playing it because of racist elements in the song’s past. (AP Photo/Chuck Burton, File)

AUSTIN, Texas (AP) — The University of Texas' long-awaited report on “The Eyes of Texas” has found that the school song has “no racist intent," but the school president said athletes and band members will not be required to sing or participate when the song is played at games and campus events.

The 58-page report, released Tuesday, was commissioned last year by school President Jay Hartzell after a group of Texas athletes, most notably football players, demanded the school drop the song as part of racial injustice protests.

Football players sparked outrage among alumni when they chose to leave the field instead of taking part in the traditional sing-along with fans after several games. Some fans sent emails to Hartzell warning the school would lose financial donors.

A 24-person panel charged with studying the song's origins, lyrics and history determined it was rooted in a message of accountability and striving toward excellence. The report also noted the song was first performed at a minstrel show, most likely with performers in blackface.

“These historical facts add complexity and richness to the story of a song that debuted in a racist setting, exceedingly common for the time, but, as the preponderance of research showed, had no racist intent,” the report states in its executive summary. “'The Eyes of Texas' should not only unite us, but hold all of us accountable to our institution’s core values."

Written in 1903 and sung to the tune of “I’ve Been Working on the Railroad,” the song is an old standard in Longhorns country. For decades, it has been sung after games and graduation ceremonies, and is a popular sing-along at weddings and even funerals

It has also been a sore subject for decades for some minority students. The title was taken from a favored saying of a former school president who had reportedly mimicked remarks by Confederate Gen. Robert E. Lee. The song was routinely performed by musicians in blackface.

The panel was not charged with making a decision on the song's future. Hartzell, with the strong backing of the school's Board of Regents, had already decided the song would stay and insisted that did not undermine the report's credibility.

Hartzell reiterated the song will continue to be played at games and events.

“This report gives us a common set of facts for more conversations,” Hartzell said. "It’s possible the committee could have uncovered something that could have caused us to reconsider. It did not.”

One of the few issues still to be determined was campus participation, particularly among Longhorns athletes. New football coach Steve Sarkisian has said his team will sing the song “proudly” after games but the report included a recommendation that students not be required to sing it.

“Nobody has been, or will be, required to sing the song," Hartzell said. “That's going to be going forward the way we continue to operate. We hope that as people go through the report, read through the facts, they'll find ways to participate in some way. Whether it's the case of the athletes standíng on the field, or the fans in the stands as we sing, there's going to be no punishment, no mandate, no requirement if people choose not to participate.”

Hartzell said he planned to meet Tuesday with the football team and other athletes.

“They started this, they should get to hear about the report first,” Hartzell said. “I hope we'll get more to a point of mutual respect where if you choose to sing and I don't, we don't necessarily judge something about each other in a stark way.”

The panel that studied the song was comprised of campus professors, staff and historians and representatives of student and band alumni groups. It also had one current athlete, band member and cheerleader. Key findings include:

— Researchers said they could find no direct link between the signature line “the eyes of Texas are upon you" and anything Lee might have said to his students at Washington and Lee University, where he was president after the Civil War. The panel determined there is a “very low likelihood” the line originated with Lee.

— The song borrows the melody of “I’ve Been Working on the Railroad,” a song with racist lyrics, most likely because it was already well known and easy to sing.

— Performances at campus minstrel shows with actors in blackface, which continued into the 1960s, are a “painful reality," but the song does not appear to have been composed as a minstrel tune.

— The panel’s 40 recommendations include teaching the song’s history at student orientation events, and allowing new alternative versions composed or performed by Black musicians.

“The report does not have a vindication or a smoking gun,” said panel chairman Richard Reddick, associate dean for equity, community engagement and outreach in the college of education. “Reading the report will help us reflect on what it means to be a university found in the post-bellum era in the Jim Crow south, and to have parts of our history in that moment, and what it means to evolve over time.”