Safety picked Notre Dame over USC because he found a bond 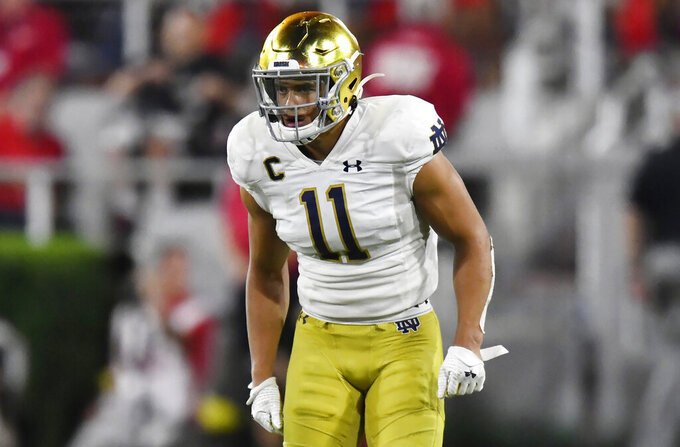 FILE - In this Sept. 21, 2019, file photo, Notre Dame safety Alohi Gilman works against Georgia during the second half of an NCAA college football game in Athens, Ga. Gilman thought he’d be on the other side of the Notre Dame-Southern California rivalry when he decided to transfer from Navy three years ago. (AP Photo/Mike Stewart, File)

SOUTH BEND, Ind. (AP) — Safety Alohi Gilman thought he'd be on the other side of the Notre Dame-Southern California rivalry when he decided to transfer from Navy three years ago.

USC was closer to his home in Laie, Hawaii, he has family in California, he knew a number of Trojan players, he liked the school's storied history and had visited the campus while in high school. Plus, being from the same hometown as former Notre Dame standouts Manti Te'o and Roby Toma, he wanted to set his own course. But he still made a visit to South Bend.

"Before I even stepped on campus I'm like, 'I'm not coming here,'" said Gilman, who back then planned on making another visit to the USC campus.

He never made it. Although the Fighting Irish were coming off a 4-8 season and the Trojans had just finished 9-3 and ranked No. 3, Gilman said he found a bond with Notre Dame.

"I felt as if the program was going in a better direction, in my opinion, than USC at the time," he said.

"All three of them are explosive players, can snatch the ball out of the air, run good routes and are able to get separation. So they are part of the full package," Gilman said. "Each of them has their own skill sets, so together they are a good combo."

The Trojans have a different look this year with a quick-strike, pass-heavy offense under coordinator Graham Harrell. Despite using three quarterbacks because of injuries, the Trojans rank 26th in the nation in passing offense at 292 yards and two touchdowns per game

"They're keeping pressure on you in that they're looking to push the ball vertically down the field much more than perimeter quick outs and runs after catch," Kelly said. "This is a big play offense."

That's a problem for the Irish with starting cornerback Shaun Crawford out with a dislocated elbow. TaRiq Bracy will be making his second start in Crawford's place and be backed up by Donte Vaughn, who the Irish hope to redshirt.

"From there, that's where it gets interesting," Kelly said, noting that after Vaughn the Irish have to depend on inexperienced freshmen. "We'll have to be creative in coverages and make sure we put our younger players, if in fact they're called on, in a position to succeed."

Gilman, who is second on the team with 29 tackles, said the Irish are looking forward to the challenge. He said what makes the rivalry so special is that there are a lot of players like him who were recruited by both schools, which causes "bad blood."

"From both sides, although we feel like we're different, we're very similar in ways, which kind of makes the rivalry more sweet," he said.