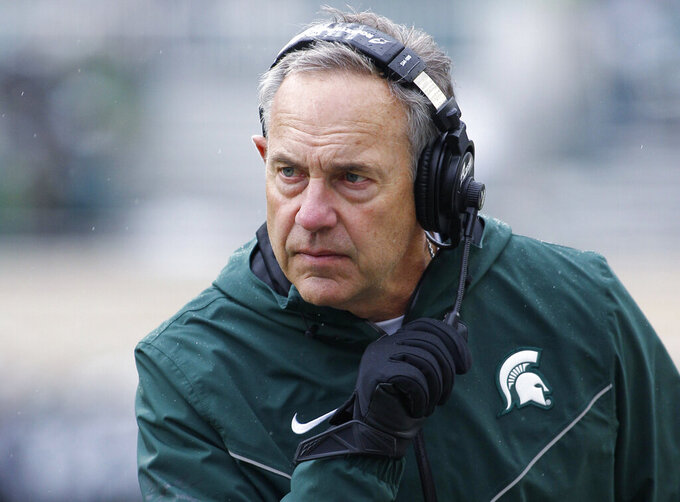 FILE - In this Oct. 27, 2018, file photo, Michigan State coach Mark Dantonio watches the second quarter of the team's NCAA college football game against Purdue in East Lansing, Mich. Brad Salem is taking over as Michigan State's offensive coordinator after Dantonio rearranged several roles on his staff. The Spartans did not announce any firings or new hires Thursday, Jan. 10, but several assistants will be in different jobs. Salem moves from quarterbacks coach to offensive coordinator, and he'll also coach running backs. Dave Warner and Jim Bollman, who have been co-offensive coordinators for Michigan State, will no longer have that duty. Warner will coach quarterbacks, and Bollman will coach the offensive line. (AP Photo/Al Goldis, File)

EAST LANSING, Mich. (AP) — Mark Dantonio is standing by his assistant coaches after a disappointing season for Michigan State.

Dantonio announced several changes within his staff Thursday, but they all involved current assistants taking on new roles. The Spartans did not announce any firings or new hires from outside the program.

"I'm a foxhole guy. I don't apologize for that in any respect," Dantonio said. "I believe in surrounding myself with loyal people. I believe in digging in when things get tough."

Dave Warner and Jim Bollman, who have been co-offensive coordinators for the Spartans, will no longer have that duty. Warner will coach quarterbacks, and Bollman will coach the offensive line.

"We have been good on one side of the ball and we need to be better on the other. But with that being said, I've always been a person that's talked to our players about our Spartans' greatest strength is the warrior standing next to them. And I believe people are committed, committed to the program, committed to the players," Dantonio said. "I really don't want to start the process all over again and bring some completely unknown guy in with a completely unknown staff, and then having them be with unknown players in an unknown commodity and start from scratch."

The Spartans had the No. 1 scoring defense in the Big Ten last season, but they were 13th in scoring offense. Injuries to running back LJ Scott and receiver Felton Davis were a factor, and Michigan State's season ended with a fizzle. The Spartans lost three of their final four games and scored only 32 points in that span.

Dantonio said he doesn't anticipate bringing in a transfer quarterback. Brian Lewerke was impressive in 2017 but couldn't repeat that performance last season. Dantonio — as he did with his coaching staff — expressed confidence that Lewerke can succeed in the future.

"The easy thing, guys, is to say, hey, we've got a great defense, (so) let's get rid of the offensive guys. Let's shake the quarterback out over here, put a little pixie dust right here and everything's going to be OK. That's not necessarily the situation," Dantonio said. "Brian Lewerke I think understands our terminology. He's been successful here in the past. I think he can be successful and I have faith in that — and so I put my faith in the people that I know, and that's the direction we're going to go."