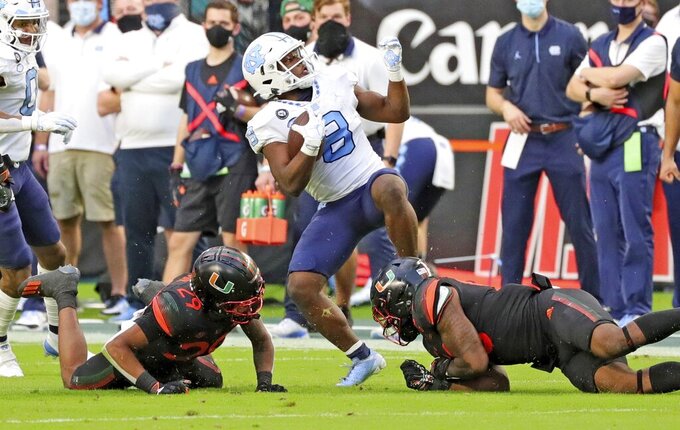 —Michael Carter and Javonte Williams, North Carolina, set an NCAA record by combining for 544 yards rushing, and the No. 20 Tar Heels embarrassed No. 9 Miami 62-26. Cater had 308 yards, Williams 236.

—Kedon Slovis, USC, threw for 344 yards and hit Amon-Ra St. Brown for an 8-yard pass with 16 seconds left for his fifth TD of the game, helping the No. 16 Trojans rally from an 18-point, third-quarter deficit to beat UCLA 43-38.

—Dillon Stoner, Oklahoma State, had eight catches for 247 yards with three first-half touchdowns in a 42-3 win over undermanned Baylor.

—Khalil Herbert, Virginia Tech, ran for 162 yards, including a 76-yard touchdown, and the Hokies ended a four-game slide with a 33-15 victory against rival Virginia.

—Jashaun Corbin, Florida State, ran for three TDs as the Seminoles snapped a three-game skid with a 56-35 win over Duke.

—Cam Porter, Northwestern, ran for a career-high 142 yards and two TDs, and the No. 15 Wildcats tuned up for the Big Ten championship game by beating Illinois 28-10.

Sarah Fuller became the first woman to score in a Power Five conference football game, cleanly kicking a pair of extra points for Vanderbilt against Tennessee.

The goalkeeper for Vanderbilt’s Southeastern Conference women’s soccer champs got her historic chance with 1:50 left in the first quarter.

Listed second out of three available kickers on the depth chart, Fuller came out for the extra point, which tied the game at 7.

The 6-foot-2 senior put the ball through the uprights and celebrated by pulling her fist in before slapping high-fives with teammates. She ran off the field with a big smile with her family in the stands all with their arms up in the air.

Center judge Chris Garner made sure to give Fuller the ball, the official bringing it to her at the sideline.

Michael Carter and Javonte Williams accomplished something that no teammates in major college football history had previously done.

The Orange Bowl — where North Carolina has never been — might be their reward.

Carter and Williams set an NCAA record by combining for 544 yards rushing, and No. 20 North Carolina embarrassed No. 9 Miami 62-26 in the regular-season finale for both teams.

Carter ran for 308 yards and two touchdowns, while Williams had 236 yards and three touchdowns for the Tar Heels. Per the NCAA, it was the seventh time that two teammates each ran for at least 200 yards, the first since 2016 and the first such instance in ACC history.

And the numbers only got worse for Miami. Carter and Williams’s combined total topped the NCAA’s listed FBS record for teammates, set on Nov. 30 when Jaret Patterson (409) and Kevin Marks (97) rushed for 506 for Buffalo against Kent State.

North Carolina finished with 778 yards — the most ever yielded by Miami and a Tar Heels record — and 554 yards rushing, also the most allowed in Hurricanes history. Sam Howell threw for a score, ran for a score and caught a TD pass for the Tar Heels.

3_Interceptions returned for TDs among the four Florida's Kyle Trask has thrown this season.

39_Turnovers this season by Duke, most in the FBS, after four in a 56-35 loss to Florida State.