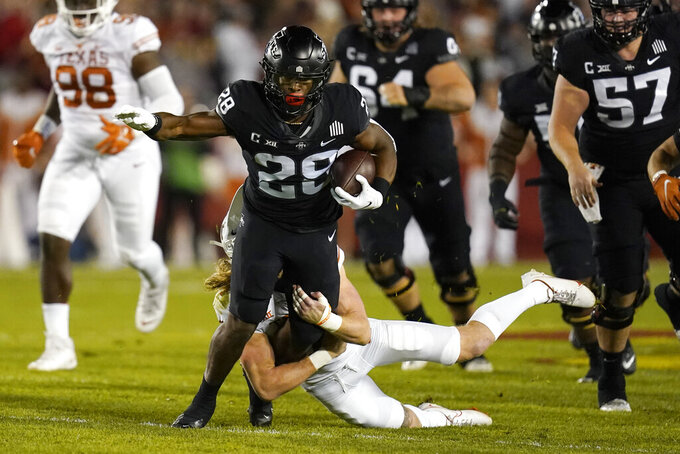 Iowa State running back Breece Hall (28) tries to break a tackle by Texas defensive back Brenden Schooler during the first half of an NCAA college football game, Saturday, Nov. 6, 2021, in Ames, Iowa. (AP Photo/Charlie Neibergall)

Abram Smith was tackling Big 12 running backs at the end of last season as a starting linebacker for Baylor. He is now bruising defenders as the league's leading rusher.

Breece Hall has rushed for a touchdown in 23 consecutive games for Iowa State, tying an FBS record.

While the Big 12 doesn’t yet have a 3,000-yard passer or 1,000-yard receiver this season, Smith and Hall are among the league’s nation's-best five 1,000-yard rushers already. And there is a good chance to add two more in the last regular-season games this week.

"He’s delivering punishment and giving energy to our team on the sidelines,” coach Dave Aranda said of Smith, who has 1,249 yards (113.5 yards per game) and 11 TDs for the ninth-ranked Bears, who still have a shot to get in the Big 12 title game.

Bijan Robinson ran for 1,127 yards before a season-ending elbow injury in the 10th game for Texas, though Kansas State sophomore all-purpose back Deuce Vaughn (1,115 yards rushing) and Oklahoma State senior Jaylen Warren (1,078 yards) can still add to their totals.

The last time the Big 12 had at least five 1,000-yard rushers during the regular season was the six it had in 2015. Only twice in the league’s first 25 seasons (2003 and 2010) did seven players reach that mark before the league championship game and bowl season.

Kennedy Brooks, already with two 1,000-yard seasons for 10th-ranked Oklahoma, has 972 yards this year after 115 against Iowa State last weekend. Brooks had 160 and 165 yards in his previous two meetings against seventh-ranked Oklahoma State, the league's best rushing defense that the Sooners face Saturday night.

West Virginia senior Leddie Brown ran for 158 yards against Texas last week to get to 909 overall. The Mountaineers, who need a win to get bowl eligible, face the Big 12's worst rushing defense on Saturday at Kansas.

The only FBS player other than Hall with rushing touchdowns in 23 consecutive games was Bill Burnett for Arkansas from 1968-70.

Hall's TD streak began in the 2020 season opener and Iowa State's career scoring leader has multiple touchdowns in 19 of his last 31 games. All of his school-record 52 total TDs (47 rushing, five receiving) came in that span. He ran for 154 yards three TDs last year against TCU, which Iowa State plays Friday.

“What makes Breece really special is he doesn’t just have to get the ball by getting that ball handed off,” Cyclones coach Matt Campbell said. “Breece can get the ball through the air and get it in some different situations.”

Smith was on the other side of the ball for Baylor the final four game last year when filling in at starting linebacker after leading tackler Terrel Bernard's season-ending injury. A two-time All-State high school running back in Texas, Smith had primarily played on special teams for the Bears until averaging 11 1/2 tackles a game in those four starts, and leading the team in each one.

But Smith went back to offense in the spring, and opened this season with three consecutive 100-yard games. He now has seven of those, one short of Walter Abercrombie's single-season school record set in 1980.

Smith's 1,249 yards are only 80 shy of the second-best rushing total in school history. The single-season record of 1,547 yards is also still in reach, especially if the Bears make the Big 12 championship and he gets an extra game to run through and over defenders.

“When the team sees that, the energy just skyrockets,” the 221-pound Smith said. “Once I know I can do that and I can impose my will on defenses, I think for me, it just gets me going and knowing that there’s a good chance I’m not getting stopped and I can be the hammer to the nail.”

The last time the Big 12 didn't have a 3,000-yard passer was 1998. Only three quarterbacks have more than 2,000 yards through the first 11 games this year. West Virginia's Jarret Doege is the league leader with 2,738 yards and maybe only one game left. Banged-up Iowa State senior Brock Purdy, who exited the Texas game for a couple of series, has 2,722 yards and Baylor first-year starter Gerry Bohanon has 2,160.

Texas receiver Xavier Worthy leads the league with 916 yards receiving and 12 TDs, with the Longhorns on a six-game losing streak and no longer bowl eligible. Xavier Hutchinson has 846 yards receiving for Iowa State, while Baylor's Tyquan Thornton is third at 838 yards. There were no 1,000-yard receivers last year in the pandemic-altered and shortened season, but the only full season the Big 12 didn't have one was 1997.