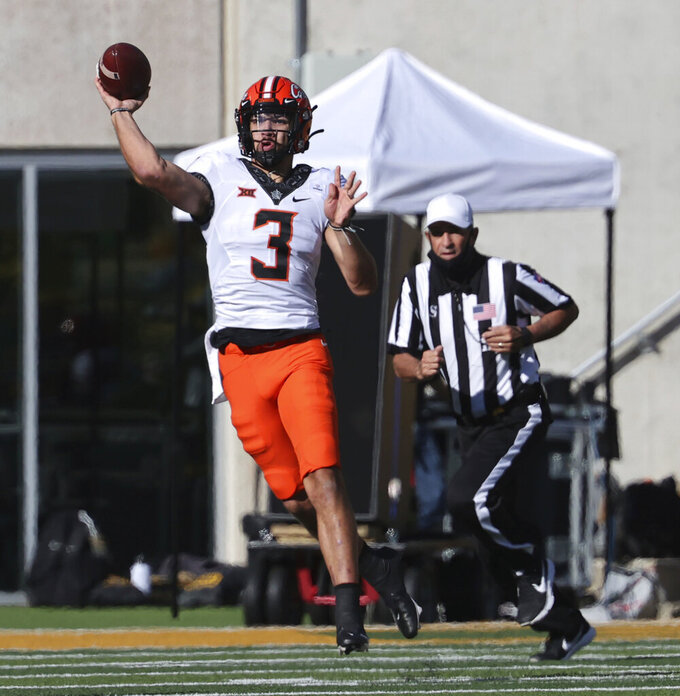 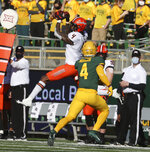 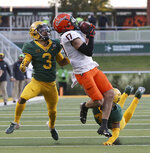 WACO, Texas (AP) — Oklahoma State receiver Dillon Stoner got behind the secondary on the second play of the game and caught the ball in stride. The tone was quickly set for the Cowboys.

That 75-yard catch-and-run was the first of Stoner's three touchdowns in the game's first 16 minutes and the Cowboys won their regular-season finale 42-3 Saturday against undermanned Baylor, which was playing two days after its football facility was temporarily closed because of COVID-19 issues.

Stoner finished with eight catches for 247 yards while freshman running back Dominic Richardson ran for 169 yards and three touchdowns for the Cowboys (7-3, 6-3 Big 12). Spencer Sanders completed 20 of 30 passes for 347 yards with two interceptions as Oklahoma State piled up 608 total yards.

“Today was just an absolute blast from all around, offense and defensive perspective," Stoner said. “I mean, we played great as a team.”

Because of injuries and COVID-19, either positive tests or contact tracing, Baylor (2-7, 2-7) had 47 people — players, coaches and support personnel — that were unavailable for the game.

This was the makeup of a game postponed Oct. 17 because of a virus outbreak in the Baylor program.

With Big 12 leading receiver Tylan Wallace out for the Cowboys because of an injury, Stoner quickly got his first touchdown of the season, and then reached through cornerback Raleigh Texada to catch a lobbed 15-yard TD. Stoner later turned a crossing pattern into a 40-yard score that put Oklahoma State ahead 21-0 only a minute into the second quarter.

Stoner nearly doubled his season total of 283 yards receiving the senior had on 29 catches in his previous eight games this season.

“Our defense was fantastic in the game and offensively we made some big plays,” Cowboys coach Mike Gundy said. “You know, it’s kind of like the way we used to play. There were times we were average. I think we had three or four series where we weren’t very good, but we still hit big plays.”

Oklahoma St: The Cowboys were ranked sixth in the AP poll when the Baylor game was initially supposed to be played, so a third-place finish in the Big 12 isn't what they expected. But they were plagued by injuries in the offensive line, and played games without their top receiver and rusher. They were the only Big 12 team to beat No. 10 Iowa State. After losing three of their previous five games, this was a strong finish to the regular season.

Baylor: This was the outlier game in Aranda's first season, which came after no spring practice and then COVID-19 issues that lingered throughout the fall. The Bears didn't get to play a nonconference game, were plagued by injuries at running back and lost the Big 12's leading tackler halfway through the season. They had three losses by a touchdown or less, and the biggest losing margin before Saturday was 13 points at No. 13 Oklahoma last week.

Oklahoma State running back Chuba Hubbard had missed the previous two games with a right ankle injury, and coach Mike Gundy said before the regular-season finale that the redshirt junior had opted out of the rest of the season to prepare for the NFL draft. He rushed for 3,459 yards and 33 TDs in his career for the Cowboys, and was introduced with seniors before their home finale two weeks ago.

Oklahoma State is set to go to a bowl game for the 15th season in a row.

Baylor goes into the offseason, with its 2021 opener scheduled Sept. 4 at Texas State.