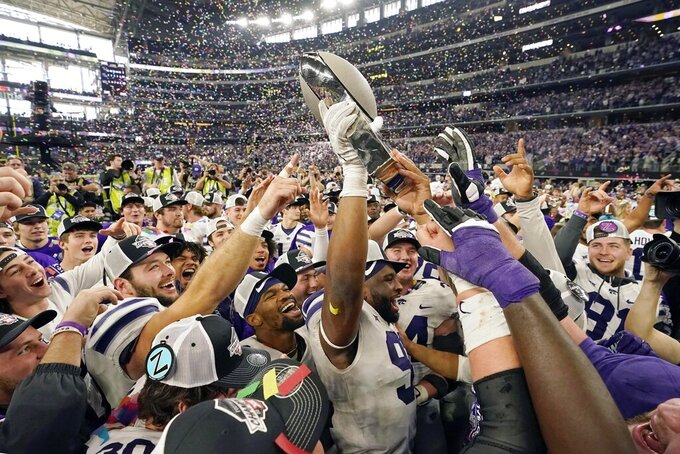 The Crimson Tide (10-2, No. 5 CFP) is headed to the Sugar Bowl for the 17th time after narrowly missing out on the four-team College Football Playoff because of losses at Tennessee and LSU on the last play of each game.

“We had opportunities in both of those games but weren’t able to take advantage of it. I think our team learned a lot, you know, from that,” Alabama coach Nick Saban said. “We played well as a team in the last three games. So, hopefully we can continue to build on that.”

Kansas State (10-3, No. 9 CFP) did its best to help Alabama's chances of a playoff berth by handing TCU its first loss of the season in overtime of Saturday's Big 12 title game in Dallas.

“I don’t think a lot of people thought that K-State would be in that Big 12 championship game, let alone win it,” Kansas State coach Chris Klieman said.

“We’re looking forward to coming to New Orleans,” Klieman added. ”I know our guys, when they saw Alabama come up, they were excited about getting a chance to play one of the traditional powers for decades in college football. Especially in the time that Coach Saban has been there."

The close loss in a title game for TCU was not enough to persuade the College Football Playoff selection committee to drop the Horned Frogs out of the top four in its rankings. TCU wound up as the third seed and Ohio State, whose lone loss came against unbeaten Michigan, is the fourth seed and will meet top-seeded Georgia in the Peach Bowl.

No. 2 seed Michigan will play TCU in the Fiesta Bowl.

Alabama has played in 75 postseason games overall and is 9-7 at the Sugar Bowl. Kansas State is heading to the Sugar Bowl for the first time.

The Sugar Bowl could be the final college game for Alabama quarterback and 2021 Heisman Trophy winner Bryce Young, if he plays at all. Young is eligible for the 2023 NFL draft and might even be the top player selected. He passed for 3,007 yards and 27 touchdowns.

Like Young, Alabama edge rusher Will Anderson also is expected to enter the draft, putting his playing status in doubt.

Saban said he wasn't sure whether Young and Anderson would suit up in New Orleans or skip the game to prepare for the draft.

“They participated in the workouts that we had last week,” Saban said. “We’ll get an opportunity to talk to them at some point in time this week.

“This is still a tremendous opportunity to play against a really, really good team. And we have a lot to prove as a team in terms of who we are and what’s the legacy of this team, how are we going to be remembered,” Saban said. “So, it’s each guy’s choice as to what they do. We — and they — have a lot of choices now.”

Kansas State has been led this season offensively by running back Deuce Vaughn, who has rushed for 1,425 yards and eight touchdowns.

Dual-threat quarterback Adrian Martinez passed for 1,261 yards and six TDs while rushing for 615 yards and 10 scores.

Since 2014, in seasons when the Sugar Bowl was not incorporated into the College Football Playoff as a semifinal, it has taken the top available teams outside the top four of the CFP rankings.

In those six non-CFP games, the Big 12 participant has won four times.

Overall, this will be the 17th Sugar Bowl meeting between teams that are current Big 12 or SEC members.

The first meeting came in the second Sugar Bowl in 1936 when TCU and Hall of Famer Sammy Baugh held off LSU.

Alabama has played in the Sugar Bowl four times since the 2008 season, losing all three times when the game was not part of the national championship structure.

The Crimson Tide beat Ohio State in a semifinal game at the end of the 2017 season en route to a national title victory over Georgia.