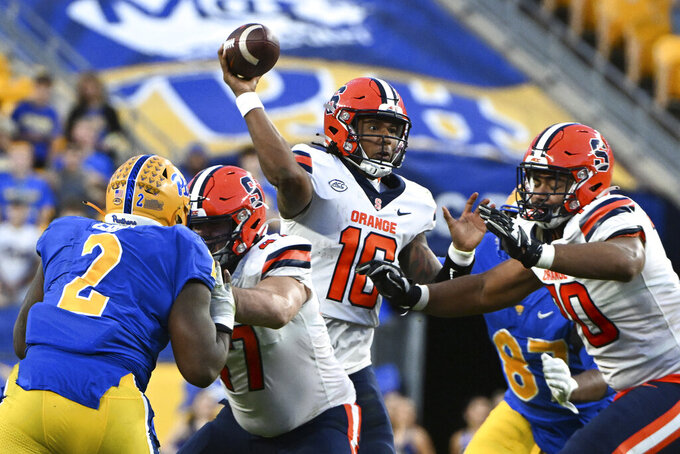 No. 25 Florida State has outscored its last two opponents by a combined 86-19 after losing three in a row and moved back into the AP Top 25 for the second time this season. The Seminoles are intent to stay there. Syracuse is reeling from three straight losses but is assured of a postseason berth. Sending the seniors out with a win in their final home game in the Dome would do a lot toward keeping the fan base engaged going forward.

Syracuse defense against Florida State run game. This will be the fourth straight game for the Orange against a team with an attack that relies heavily on the ground game, and they've lost the first three. Injuries have taken a toll on the Syracuse defense — LB Stefon Thompson has been out since the opener and DB Garrett Williams has joined him with a knee injury. But the Orange still lead the conference in total defense (306.9 yards per game) and are second in scoring defense (18.4).

Florida State: RB Trey Benson ran for a career-high 128 yards and two TDs last Saturday in a 45-3 rout against in-state rival Miami. Benson, who had runs of 42, 26 and 21 yards against the Hurricanes, ranks second in the ACC with 10 runs of 20 or more yards.

Syracuse: QB Garrett Shrader did not play against Pitt last week and also sat out the second half of the previous game against Notre Dame. Coach Dino Babers didn't know Shrader's status early in the week. If Shrader is not cleared, redshirt freshman Carlos Del Rio-Wilson will get his second straight start.

FSU leads the nation with 15 touchdown drives of 80-plus yards and with seven touchdown drives of 90 or more yards. ... Syracuse is 5-1 at home and a sixth win would tie for the most wins since the Dome opened in 1980. ... FSU is one of four teams in the country, and the only one in the ACC, averaging at least 270 yards passing and at least 210 yards rushing. ... Syracuse DB Ja’Had Carter has an interception in each of the past three games and leads the team with three picks. ... The Seminoles top the ACC and rank fifth in the country in pass defense, holding opponents to an average of 165 yards, and they've limited opponents to an average of 6.1 yards per pass attempt, ninth nationally and first in the conference.