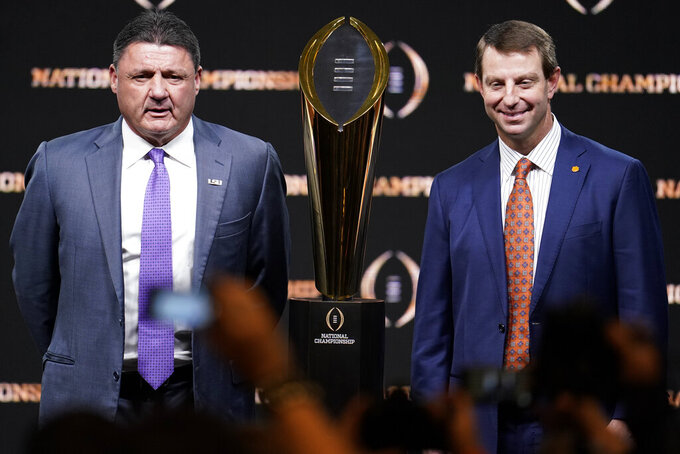 NEW ORLEANS (AP) — Dabo Swinney can turn most any issue into an extended, persuasive sermon. If he was a salesman, we'd all probably be buying time shares.

Ed Orgeron is as comfortable talking gumbo and jambalaya as he is the run-pass option, embracing his Cajun heritage and guy-next-door demeanor.

“I just try to be myself,” said Swinney, possessor of that amusing nickname and architect of the nation's most dominant program at Clemson.

“You have to play to your strengths,” added Orgeron, who can laugh right along with those who portray him as a marble-mouthed rube.

“Some guys are CEOs,” Orgeron said. “It takes all kinds. I always felt that I was a people person."

That's not to say hard-nosed coaches such as Saban, whose team missed the College Football Playoff for the first time in its six-year history, care less about their players or engender a lower degree of loyalty in those they are leading.

And that's certainly not to say that more approachable coaches such as Swinney and Orgeron are slacking on the details and discipline every great program must have, or even to say that they can't get a bit snippy at times.

But these two coaches have clearly brought a different feel to this year's title game.

When establishing the tenor of their organizations, both made sure to put personal relationships at the top of the list — whether it's grieving during tragic times, or making tough changes on a coaching staff, or luring a quarterback from Ohio who would go on to win the Heisman Trophy.

“I had one conversation with Coach O on the phone,” said Joe Burrow, LSU's record-setting signal-caller. “I was sold just about immediately.”

He has certainly noticed plenty of similarities between Swinney and his father, who might be the most successful example of the laissez faire, aw-shucks approach to college coaching. It's a profession that was long ruled by domineering dictators such as Bear Bryant and Woody Hayes.

“I would compare Dabo to my father ... as far as personality and character and the way he runs an organization,” Bowden said in a lead-up to the title game. “He's much more detailed than my father, but he has the same demeanor, the same personality, the same character and beliefs. He's got his priorities set.”

The success of coaches such as Swinney — whose team has won 29 straight games and two of the last three national titles — and Orgeron could be an indicator that an evolution is already stretching beyond the college game.

The NFL's Jacksonville Jaguars recently fired team president Tom Coughlin, a two-time Super Bowl champion who certainly subscribed to the General Patton school of coaching. Even from the front office, he imposed his draconian standard of discipline, which led to an embarrassing dressing-down from the players' union.

Facing the prospect of being unable to sign top free agents, the Jaguars had little choice except to dump Coughlin.

Compare that with Swinney's emotional speech after winning his first national title, or the way Orgeron dealt with offensive coordinator Steve Ensminger losing his daughter-in-law in a plane crash mere hours before the Peach Bowl semifinal game.

“I love my team,” Swinney said back in 2017, choking up after Clemson rallied for a 35-31 victory over Alabama in the championship game. “I told 'em tonight that the difference in this game would be the love that they have for each other.”

Ensminger won't reveal what Orgeron said to him after last month's plane crash, but the tears that began to form in the coordinator's eyes during media day were ample evidence of how much those words meant in dealing with overwhelming grief.

Both Swinney and Orgeron revel in the role of underdog, as well.

Swinney, after all, had never been a head coach until he was named the interim boss at Clemson about a month ahead of his 39th birthday, coincidentally after Tommy Bowden — Terry's older brother and another of Bobby's coaching sons — was forced out in the midst of a disappointing campaign.

No one at the time could have conceived that Swinney would get the job permanently, much less lead the program to unprecedented heights and establish himself as one of the game's most influential figures.

“It was kind of a stepping-stone job when I came in as an assistant,” Swinney recalled. “That was one of the things I wanted to change. I wanted to make it a destination job, and that's what it's become.”

Now, even though he grew up in Alabama, played for the Crimson Tide and has been mentioned as a logical successor to Saban some day, it's hard to envision Swinney coaching anywhere else.

He has built a program totally in his image. Sure, he's rubbed some people the wrong way with his passionate Christian faith and diatribes against paying players (while making $9.3 million a year, more than any other coach), but there's little doubt about his sincerity.

It's downright impossible to see Orgeron in any other job, though he wasn't the first (or probably even the second) choice when he was hired after the 2016 season, his resume marred by a dismal tenure at Ole Miss and failure to land the permanent job at Southern Cal.

He's Louisiana born, Louisiana bred, Louisiana through and through. His recruiting trips around the state have become parties. He's now one of the most recognized figures on the bayou, yet has maintained a humble, we're-all-in-this together approach.

“One team, one heartbeat,” Orgeron said. “Everybody has a role. Nobody's role is more important than the other.

"I coach from within, not above.”