Syracuse out to snap 3-game skid, hosts No. 25 Florida State 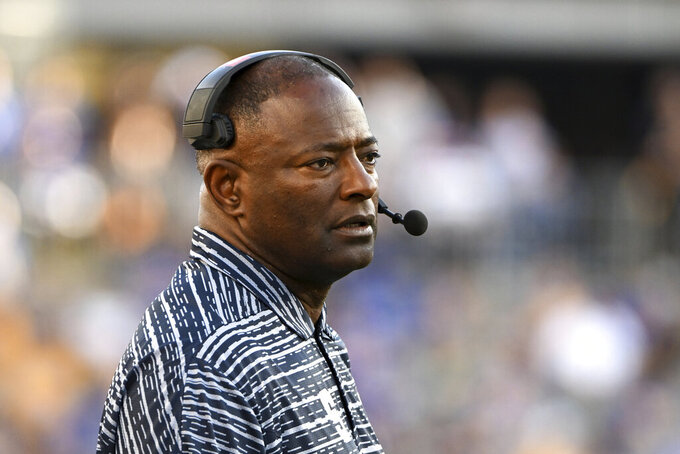 Just over three weeks ago Syracuse was riding high, undefeated after six games and ranked No. 14. Three straight losses have sent the Orange plummeting out of the rankings and they're desperate to stop the skid.

“It comes down to who you play, when you play, whether you’re healthy or not healthy,” coach Dino Babers said. “Nobody’s playing the violin for us. We’ve got to find a way to win with the guys we have on the field.”

The three losses have had a common thread — Clemson, the Irish, and Pittsburgh used the run to pound the Orange defense. Combined, the Tigers, Irish, and Panthers ran the ball 164 times for 700 yards and eight touchdowns. In the past two games the Syracuse defense has been on the field for more than 74 minutes.

“Florida State runs the ball just as much, and it’s going to be the exact same situation,” Babers said.

The resurgent Seminoles, fresh from a 45-3 victory over in-state rival Miami, have won two straight to get back in the rankings after three straight losses.

“I like where we have came so far from where we have been,” Seminoles linebacker Kalen DeLoach said. “I’m enjoying the moment, taking it day by day.”

Syracuse has sputtered offensively as quarterback Garrett Shrader deals with an undisclosed injury that has kept him off the field for six straight quarters. His status for Florida State is unclear. The Orange have allowed 10 sacks in the past two games with redshirt freshman Carlos Del Rio-Wilson getting indoctrinated at quarterback. Syracuse also failed badly on third down, converting just seven of 27 (25.9%) chances.

“Everybody else is responsible for making his (Del Rio-Wilson's) job easier and as a unit, we did not play well,” said Babers, who is 5-18 in November during his seven-year tenure at Syracuse. “We're anticipating that we're going to play a lot better.”

Florida State has run for over 200 yards in four consecutive games and leads the ACC with 211.8 rushing yards per game. The Seminoles' offensive line did not allow a quarterback pressure in the win over Miami and blocked for an attack that ran for 229 yards — a little more than double what the Hurricanes were allowing — and passed for 225. The Seminoles lead the ACC in yards per rush (5.5).

“I’ve been watching them on film. They have been playing good,” said Syracuse linebacker Mikel Jones, who leads the team with 76 tackles. “These last few games haven’t been the best for us, but I feel like we’ve been playing good, so I’m excited for the matchup.”

Without the ability of Shrader to keep defenses honest with his running, Syracuse tailback Sean Tucker has struggled, too. He's averaging 5 yards a carry on the season but in the past two games has gained just 79 yards on 26 carries, an average of 3.03 yards per carry.

This will be the final home game for Syracuse's seniors and they hope their postgame walk around the Dome to thank the fans is full of smiles. The Orange lost last year's home finale to Pitt, the last of a season-ending, three-game losing streak that left them one victory shy of qualifying for a bowl game. A victory would match the program record for home victories in a season in the Dome (6) since it opened in 1980.