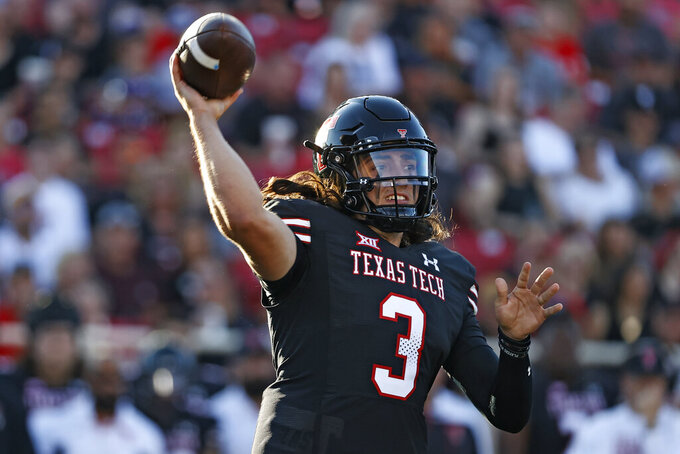 LUBBOCK, Texas (AP) — Kendre Miller rushed for 185 yards and three touchdowns, Zach Evans had 143 yards and two scores without a carry after halftime and TCU ran past Texas Tech 52-31 on Saturday night.

Evans didn't have another carry he appeared to hurt his foot on a 1-yard touchdown with 1:35 left in the first half that pushed the Horned Frogs (3-2, 1-1 Big 12) to a 35-10 lead. It was his fourth consecutive 100-yard game, and his sixth in the last eight games going back to last season.

TCU coach Gary Patterson said Evans, whose 17 carries before halftime were more than he had in each of the last two games, could have returned if needed.

“We just made a decision. ... We wanted to be very careful about it, the injury," Patterson said. “It's not a good turf for foot injuries.”

The Frogs, playing their first road game of the season, piled up 394 yards rushing. They jumped out to a 14-0 lead midway through the first quarter on a 33-yard score by Miller.

Henry Colombi, under intense pressure most of the night, completed 23 of 41 passes for 344 yards for Texas Tech (4-2, 1-2), which finished with 558 total yards. SaRodorick Thompson ran for 118 yards and three TDs.

"We played cruddy defense ... The bottom line is, we didn’t stop the run," Tech coach Matt Wells said. "Offensively we moved the ball well at times, but not very smooth early.”

The Red Raiders were coming off a 23-20 win at West Virginia after dropping their Big 12 opener 70-35 at Texas, which came after they swept through their three non-conference games undefeated.

“We’re not at the point yet in this program where we can stack success, and that’s something we’ve got to continue to keep getting over the hump,” said Wells, in his third season.

Miller had two of his touchdowns after halftime, wiggling through a hole on an off-tackle run and dashed down the sideline for a 75-yard TD. He also broke free for a 45-yard touchdown with 4:51 left in the game to finally ice the victory after Tech failed on an onside kick attempt.

Tre’Vius Hodges-Tomlinson returned an interception 29 yards for a touchdown before halftime, when he grabbed a pass that banged off the hands of Texas Tech receiver Myles Price.

“It was a play that I had seen on film. I got a good ball key, saw the quarterback hop and once he hopped the ball came out,” Hodges-Tomlinson said. “I saw it was a high ball, and I knew it was going to be tipped, so I stayed in my position that I was in and it came right to me.”

TCU: The Horned Frogs ended a two-game losing streak, having played well at stretches in home losses to SMU and Texas. TCU avoided its first three-game skid since 2017.

Texas Tech: For the second time in three weeks, a defensive squad considered to be a strength struggled to get an opponent off the field without points being scored, especially in the first half. The Red Raiders haven’t beaten TCU at home since 2013.