TCU's loss gets Tide a last look, but Frogs should make CFP 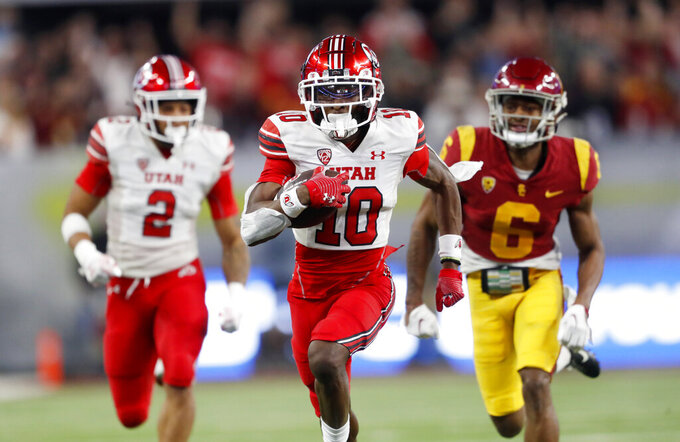 Alabama is going to get one last look from the College Football Playoff selection committee.

Whether the Crimson Tide deserves it is debatable, at best, but after both TCU (12-1) and Southern California (11-2) lost the committee has to at least talk about making Alabama (10-2) the first team with two losses to make the playoff.

Tide coach Nick Saban, without a game to play, spent his Saturday making a media tour and lobbying for his team.

“If we played any of those teams that are on the edge of getting in, would we be the underdogs or the favorite?” Saban said on Fox at halftime of the Big Ten championship.

The field of four will be announced Sunday.

Defending champion Georgia (13-0) will be No. 1 after the Bulldogs won the Southeastern Conference — emphatically. No debate about that.

TCU coach Sonny Dykes said he was concerned about the Horned Frogs' playoff status, but that he had faith in the committee.

He is right, but the top four didn't fall gently into place on championship weekend.

No. 4 USC's loss to Friday to No. 12 Utah in the Pac-12 championship pretty much ended the Trojans' playoff hopes.

That was huge news for No. 5 Ohio State and coach Ryan Day.

A week after the Buckeyes (11-1) were thumped at home by No. 2 Michigan, fans in Columbus were glued to the events in Las Vegas and got the result they needed — and maybe a rematch with the Wolverines in their future.

Michigan (13-0) stomped Purdue on Saturday night on the way to a second consecutive Big Ten championship.

Championship Saturday started with the third-ranked Horned Frogs falling to No. 13 Kansas State in the Big 12 title game. As has been the case all year, it was a wild ride for the Hypnotoads. They erased an 11-point deficit in the fourth-quarter behind a heroic effort by Max Duggan before losing in overtime.

The Frogs headed to the clubhouse having beat every team they have played, with plenty of close calls and comebacks, but no conference championship.

There is precedent for unbeaten teams losing their conference title games and remaining in the top four. Georgia was No. 1 when it happened last year against Alabama and fell to No. 3.

In 2020, Notre Dame lost a rematch with Clemson in the Atlantic Coast Conference title game and went from No. 2 to No. 4.

There is no previous case to support Alabama making the playoff under these circumstances, but this system has been around for only nine years. Don't get too hung up on previous results predicting future performance by the committee.

The Tide have their supporters.

“I am no expert but no one can convince me that @AlabamaFTBL isn’t better than these teams I have been watching despite 2 heartbreaking L’s. if rule is BEST 4 for playoffs BAMA should be in,” ESPN college basketball analyst Dick Vitale tweeted.

So 'Bama has that going for it.

The 13-person selection committee already made one questionable call that went Alabama's way when it ranked the Tide sixth last week and Tennessee, which beat Alabama in October, seventh.

The committee chairman cited Alabama's close losses compared with the Volunteers (10-2) being beat soundly in the two games they have dropped.

Alabama twice lost on the last play of the game, by three at Tennessee and by one at No. 11 LSU (9-4). The LSU result doesn't look quite so impressive after Georgia hung a 50-30 loss on the Tigers, just because it could.

Alabama has its share of great escapes, too. Games against Texas and Texas A&M came down to the last play. Alabama's best victories? Probably against Mississippi State, Mississippi and Texas, all 8-4.

TCU's resume is built mostly on the foundation of the Big 12 being a conference with no easy outs. Oddly, the Frogs' best victory got better Saturday when they lost a rematch to Kansas State, which already was in the committee's top 10.

The best argument for Alabama is made by advanced metrics. Coming into this weekend, ESPN's SP+ had the Tide fourth and its FPI had Alabama second. FEI, used by Football Outsiders, had Alabama fifth.

A composite of popular computer formula rankings had Alabama third and TCU eighth. Those are the type of forward-looking metrics used by oddsmakers.

Saban is right. Put the Tide and Frogs on a neutral field and, yes, Alabama is favored by at least a touchdown.

But Alabama was favored against both Tennessee (7 1/2 points, according to FanDuel Sportsbook ) and LSU (12 1/2).

The recruiting rankings also give Alabama an edge. The Tide has the second-most talented roster in college football behind Georgia if you count up the stars. TCU's is 32nd.

But results of games have to matter or why even make Alabama play?

“How are they playing at present?” Saban said to ESPN, citing the Tide's 3-0 finish to the season with a healthy quarterback Bryce Young.

As it is the Tide, and Ohio State for that matter, essentially benefited from failing to win their divisions and not playing at present while USC and TCU had to prove themselves one more time.

“I don't think we should be punished for coming to the Big 12 championship game,” Dykes said.

A playoff bid should be a reward for the season. What has Alabama done on the field to earn it?

WHAT ABOUT THE HEISMAN?

The Heisman Trophy appeared to be USC quarterback Caleb Williams' to lose heading into the weekend.

The Trojans lost, but Williams was as impressive as ever, hobbling through most of the Pac-12 championship game after straining his hamstring. He passed for 363 yards, facing heavy pressure and without his usual mobility.

Still, the door was open at least a crack for Duggan, and, boy, did he bust through.

Battered and bruised, Duggan had 251 yards passing and 110 rushing. For some reason on two tries at the end zone from the 1 in OT, Dykes didn't call Duggan's number either time.

Heisman finalists will be announced Monday, but both Williams and Duggan should be booking trips for New York City for the handout next Saturday.

Right after some time in the cold tub.

Here's how the College Football Playoff and New Year's Six bowl selections should shake out: