Uiagalelei leads No. 5 Clemson to 35-12 victory over Furman 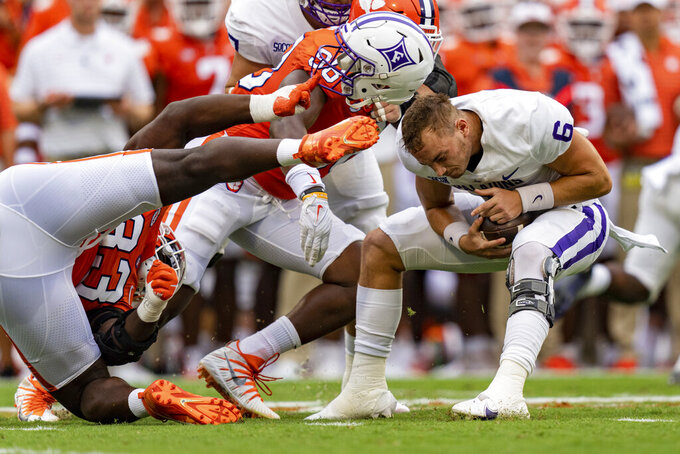 CLEMSON, S.C. (AP) — DJ Uiagalelei looks more and more like the leader who can continue Clemson's championship legacy, than the one who struggled his first season as a starter a year ago.

Uiagalelei threw for 231 yards and two touchdowns and the fifth-ranked Tigers took a big, first-half lead to beat FCS opponent Furman 35-12 on Saturday.

“You can see he's playing with a lot of confidence,” Clemson offensive coordinator Brandon Streeter said. “It shows.”

That wasn't the case in 2021 as Uiagalelei, the highly touted passer who figured to instantly replace Clemson's No. 1 NFL draft pick in Trevor Lawrence, struggled to find his way. Uiagalelei had nine touchdowns against 10 interceptions as the Tigers fell from the national and ACC title chase by midseason.

“There's been nobody more under the fire than him," Clemson coach Dabo Swinney said about Uiagalelei. “Two games don't make a season, but proud of how he's played.”

Uiagalelei led Clemson to touchdowns on his first five drives to take a 35-9 lead early in the third quarter. Uiagalelei did have a pick off a tipped ball with his team ahead by 23 points.

“For the most part, I played a solid game,” Uiagalelei said. “Overall, I thought it was good game today.”

Things might be quieter this week for Uiagalelei, who finished 21 of 27.

It was Clemson's eighth straight victory, longest among Power Five teams; its 35th straight win at home and 32nd in a row over Furman. Clemson improved to 37-0 alltime against FCS teams.

Clemson opened 2-0 for the seventh time in eight wins.

Uiagalelei, although he said he didn't hear it, got plenty of support from the home crowd, the student section chanting “Let's Go, DJ” several times in the first half.

“You get kind of locked in once the game starts,” the third-year quarterback said.

Will Shipley had TD runs of 1 and 17 yards, giving the sophomore tailback 15 touchdowns in 12 career games at Clemson.

Furman (1-1) punched holes in Clemson's defense, things future Tigers' opponents will certainly break down in pregame prep. The Paladins of the Southern Conference gained 384 yards after Clemson yielded on 237 to Georgia Tech in the opener.

“This team has shown a lot to me these past two games,” said Furman quarterback Tyler Huff, who transferred from Presbyterian this season. “When we played against a big opponent and were down pretty quick. Nobody gave in, nobody folded.”

Furman coach Clay Hendrix thought Uiagalelei was the difference. “I thought he completely beat us,” Hendrix said. “He did a couple of things I wasn’t sure he could do. Hats off to him.”

Furman: The Paladins found ways to make plays, just not enough to stay close to the ACC preseason title favorite. At least Furman goes home with the $415,000 guarantee for playing at Death Valley.

Clemson: The Tigers remain a work in progress. A defense that seemed so strong in defeating Georgia Tech looked leakier against Furman. Clemson will need to get things cleaned up over the next two weeks before heading to No. 23 Wake Forest on Sept. 24.

POLL IMPLICATIONS: Clemson fell a spot in the rankings last week after a 31-point win over Georgia Tech 41-10. Who knows what's ahead after the Tigers did the expected by blowing out Furman.

DABO DEAL: The game was the first since Dabo Swinney agreed to a reworked contract that will pay him $115 million over the next 10 seasons through 2031. Swinney said new athletic director Graham Neff reached out to the coach's agent to begin crafting the deal. Swinney has won seven ACC crowns and two national titles his first 13 full seasons. He thought more big things are ahead. “And I'm only 52,” he said. “I'm learning. I'm getting better.”

DABOTRON: Clemson's new video board debuted Saturday. The scoreboard over the East end zone at Memorial Stadium that's five times larger and 20 times the resolution of the one that was in use the past 10 seasons. The improvement was among $20 million in upgrades in phase one of a $68.7 million worth of enhancements to the Tigers' home field. The video screen, the eighth largest in the NCAA, was nicknamed “Dabotron” by the school's assistant athletic director of football communications in Ross Taylor.