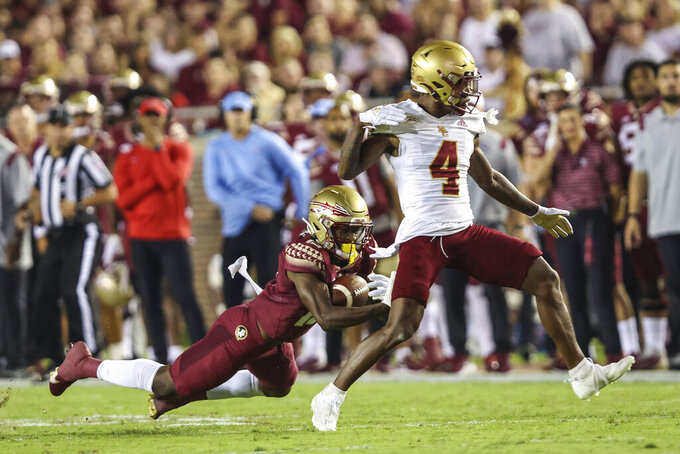 TALLAHASSEE, Fla. (AP) — Florida State is just the second team in Atlantic Coast Conference history to start one season 0-4 and open the next 4-0. And it's been nearly 40 years since Virginia’s turnaround in 1982-83.

Through two losing seasons under new coach Mike Norvell, there were hard lessons for Florida State with a mix-and-match roster of high school signees, as well as an infusion of talented players from the transfer portal who could be leaders as well as productive.

There were small steps forward in 2021, including a rivalry win over Miami en route to a 5-7 season, but the Seminoles’ 2022 start has them ranked No. 23 and featured impressive wins over LSU and at Louisville, as well as a domination of Boston College last week.

“We have a long way to go,” Seminoles quarterback Jordan Travis said. “But, yeah, I’m very happy for this football team. I’m proud of everybody on this football team because we’ve been through a lot together. That’s the main thing – we always say together. This is a team that’s like a roller- coaster, been a lot of ups and downs. And we keep getting better every single day.”

Norvell has engrained a mindset of hard work and preparation on the practice field, one that he felt would put the Seminoles in position to win games.

“Still a lot of things we have to clean up, continue to improve,” Norvell said. “… I’m excited about where this team can go.”

The next step is Wake Forest, which controlled the 2021 matchup with Florida State, 35-14, behind an efficient offense and six takeaways. Wake Forest is coming off a 51-45 double-overtime loss to No. 5 Clemson, a thriller that saw the Demon Deacons trading big plays with the preseason ACC favorite Tigers until coming up empty on a fourth-down pass to the end zone.

The challenge for the Demon Deacons is getting back up emotionally from falling just short in a game that was so close to a huge win for Dave Clawson’s reigning Atlantic Division champions.

“At the end of the game, we believed we were going to win that game,” Clawson said. “We didn’t and we’re disappointed. That’s football and that’s life. So you’ve got to move on to the next challenge. And the next challenge is a very daunting one.”

For Clawson, there was little to fault in his team’s effort and preparation. So his message to the players afterward was looking forward to what they can do next.

Wake Forest quarterback Sam Hartman was terrific in the Clemson loss, routinely pushing the ball downfield to attack Clemson’s injury-battered secondary. He finished with 337 yards through the air and a program-record six touchdown passes.

The Demon Deacons also continued their trend of strong receiver play. Donavon Greene and Jahmal Banks each had two TD grabs, while A.T. Perry had one scoring grab and has proven capable of being a game-changing downfield threat.

Florida State won two straight games without standout defensive tackle Fabien Lovett, and he was seen with a boot on his foot before the Boston College game. The Seminoles’ best defensive end, Jared Verse, and left tackle, Robert Scott, also did not play against BC. Their status for Saturday’s game remains questionable.

Since the 0-4 start last season, Florida State is 9-3. The Seminoles are also 6-2 in their last eight ACC games.

44 minutes ago
By Greg Beacham an hour ago
By Gary B. Graves 2 hrs ago
By Michael Marot 4 hrs ago
By Aaron Beard 6 hrs ago