USC's defense has plenty to work on after great escape 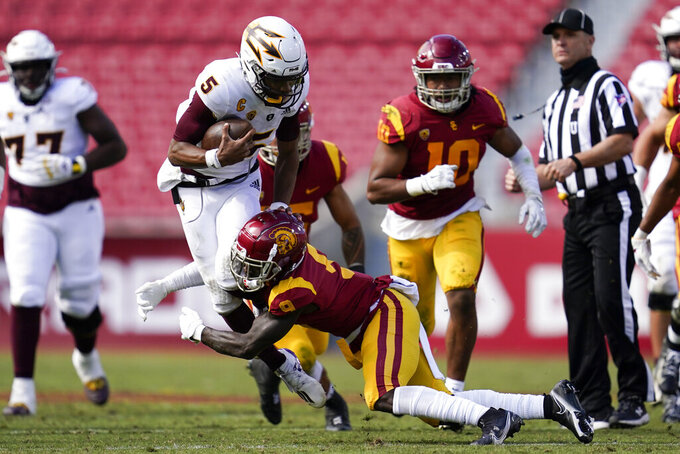 Fortunately, the defense was able to clamp down in the fourth quarter and the Trojans escaped with a 28-27 comeback win over Arizona State. But Orlando understands No. 20 USC needs to improve, and he hopes it begins at Arizona on Saturday.

“We know that we can play much better than we did,” Orlando said. “End of the day, we won the ball game and let’s move on to the next one, but they’re a space team. They’re gonna get people the football, dynamic guys, get them in space and try to run away from you.”

USC (1-0) looked vulnerable to explosive plays in the season opener. They gave up five plays of at least 20 yards, accounting for 43% of the Sun Devils’ 392 yards of total offense.

Orlando singled out the linebackers for a disappointing showing. The two inside linebackers were too aggressive on Arizona State’s first touchdown — creating a cutback lane on DeaMonte Trayanum’s 25-yard run — and similar gaffes were apparent on other chunk gains.

“We got to get better, and I have no problems saying that because I coach the position,” Orlando said. “Got to do a better job of getting those guys to play faster, more physical and more violent. So they know. I mean, we went into that room and anytime you give up the amount of running yards that we did, that is the position that you got to get that stuff corrected so it’s all of us.”

Orlando’s best units at Houston and Texas were able to stop the run. He recognizes USC has no chance to be a top-tier defense if it can't create the most favorable conditions for negative plays, which tend to come in passing situations. If the offense can run the ball effectively, there's no opportunity to pressure the quarterback into sacks, fumbles or interceptions.

“When you’re giving up that many rushing yards, that’s not a good thing with us,” Orlando said. “It’s one thing when you have a dynamic quarterback that scrambles and does that stuff, I’m not talking about those things. Those happen. … But the traditional tailback running game, if you’re not doing a good job you have no chance of playing elite defense because nobody will throw the ball on you.”

Arizona, which had its game at Utah canceled because the Utes did not have the minimum number of players available following positive COVID-19 tests and contact tracing, was successful in moving the ball on the ground last season. The Wildcats ranked third in the Pac-12 in yards per carry (4.63) and yards rushing per game (174).

There were some bright spots in Orlando's debut. Defensive tackle Marlon Tuipulotu was dominant up front with eight tackles, including two tackles for loss with a sack. The strong play of the redshirt junior, who had a second sack and a forced fumble negated by a defensive holding penalty, was needed after Jay Tufele declared for the NFL draft in August.

“Well, he made the plays to settle us down,” Orlando said. “You’re looking for two or three plays that are outside the norm that go along with the plays that you should make, and when you have really special players like that, that’s what they should do and that really helps you.”

Tuipulto is confident USC will cut down on mistakes going forward because of how the Trojans persevered against Arizona State, allowing just 58 yards on 15 plays in the fourth quarter.

“Our defense did a good job of not giving in,” Tuipulotu said. “We still wanted to go out there and play ball, and that’s exactly what we did. Credit to all our guys just keeping the energy up on the sideline and our coaches just giving us energy like to just go out there and keep playing. And we didn’t give up.”