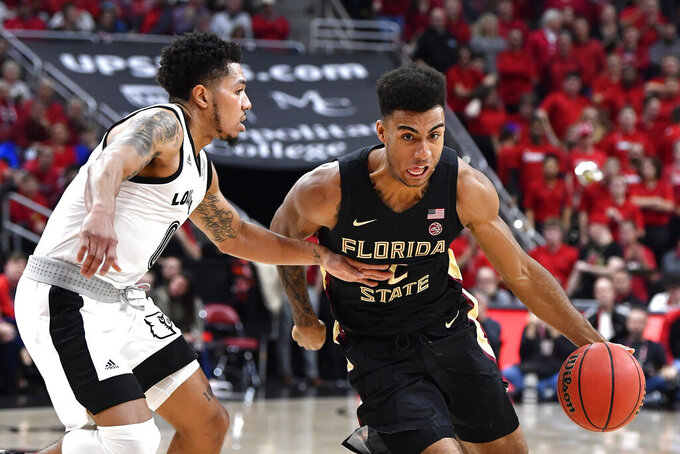 Florida State guard Anthony Polite (2) attempts to get away from the defense of Louisville guard Lamarr Kimble (0) during the first half of an NCAA college basketball game in Louisville, Ky., Saturday, Jan. 4, 2020. (AP Photo/Timothy D. Easley) 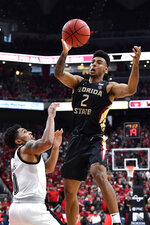 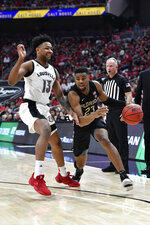 Walker, a five-star hoops recruit who turned down football scholarships from Michigan, Miami and Clemson, scored 23 points and made 5 of 7 3-pointers for the 18th-ranked Seminoles, who beat No. 7 Louisville 78-65. It was his first action since suffering a bone bruise in a win over North Alabama last Saturday.

“He hadn’t practiced probably in about 10 days,” Seminoles coach Leonard Hamilton said. “He didn’t even practice yesterday, but he walked through everything.”

The Seminoles (13-2, 3-1 Atlantic Coast Conference), who were 6 1/2-point underdogs, endured a big game from Louisville's Jordan Nwora to pull the upset. The preseason All-American scored 32 points, matching a career high.

But the Cardinals (11-3, 2-1) could not overcome a 55.2% shooting performance by the Seminoles in losing their second straight. Florida State made a season-best 11 of 23 3-pointers in extending its winning streak to six.

“I give all the credit to Florida State,” Louisville coach Chris Mack said. “I thought for, really, the entire game they were the tougher team. I thought our guards got manhandled. They shot over the top of our guards, especially in the second half.”

Walker finished one point short of his career high. Trent Forrest added 20 points on 9-of-11 shooting, and Devin Vassell scored 14. Those three guards are all 6-foot-4 or taller. Three of four Louisville guards who played 14 or more minutes were 6-2 or shorter.

Nwora had a hot hand early for Louisville, scoring 21 points in the first half. The junior shot 6 of 9 from the floor, but the Cardinals combined to make just 10 of 37. They went the last 5:04 without a field goal as the Seminoles took 39-32 lead into the break.

Walker helped offset Nwora’s early barrage. Usually a starter, the 6-5 junior came off the bench to score 15 points in the first half on 6-of-8 shooting, including 3 of 5 from 3-point range.

He said the bruise hasn’t completely healed. He felt he was at about 90 percent as he continues to get treatment.

“When your adrenaline’s rushing and then just who I am, when I’m out there on the battlefield, I want to sell out for my teammates, so I don’t think about (the injury) at all,” Walker said. “When I was out there, I didn’t feel anything. It just came natural.”

Florida State led 52-42 with 13:43 remaining. Louisville cut that to 54-51 on Nwora's putback, but that was as close as the Cardinals would get.

“They played better than us today,” Louisville guard Lamarr Kimble said. “We’ll see them again down the road, so I think our group of guards will be ready for that.”

Look for the Seminoles, who beat a ranked foe for the third time this season, to move up in Monday’s poll. The Cardinals, who spent two weeks at the top spot last month, will likely find themselves outside the top 10.

The trip to Louisville allowed Hamilton to reconnect with his old boss, former Kentucky coach Joe B. Hall. Hamilton served as an assistant to Hall for 11 of the 12 years he spent in Lexington, including the 1978 championship team. On Friday, Mike Summers, a former assistant football coach at Louisville and Hall’s son-in-law, brought Hall to the team’s hotel for a visit.

“I just want to make sure that every chance that’s available, I’m going to try to come up here and enjoy those moments,” Hamilton said.

Florida State: The Seminoles' perimeter shooting not only helped them beat a top-10 team on the road, it also gave them consecutive wins at Louisville for the first time in a series that dates back to 1968. FSU also won 80-76 at the KFC Yum Center on Feb. 3, 2018.

Louisville: Playing for the third time in 17 days, the Cardinals had their worst shooting half of the season in the first half. They followed that up by committing 11 of their 16 turnovers in the second.

By Ralph D. Russo 20 minutes ago
an hour ago
By Brett Martel 2 hrs ago
2 hrs ago
By Bernie Wilson 3 hrs ago