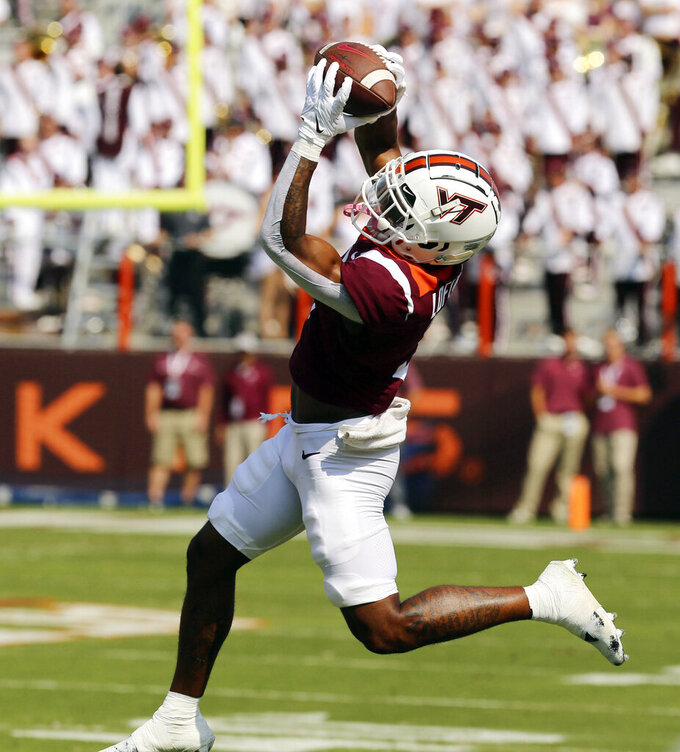 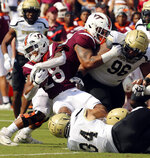 BLACKSBURG, Va. (AP) — Grant Wells threw for 314 yards and two touchdowns to lead Virginia Tech to a 27-7 victory over Wofford on Saturday.

Wells completed 26 of 35 passes and the defense for the Hokies (2-1) dominated throughout, handing the Terriers (0-3) their 13th consecutive loss.

Virginia Tech put the game away with 17 second-quarter points, which was more than enough against a Wofford offense that had not scored this season until Nathan Walker’s 3-yard touchdown run with 9:34 left in the game.

That score, which was set up by a 47-yard pass from Wofford's Jimmy Weirick to Landon Parker, prevented the Hokies from recording their first shutout since 2019.

“I’d be lying if I said it didn’t,” Virginia Tech coach Brent Pry said when asked if he wanted the shutout. “We rolled some guys through, and we talked about it in the locker room. The standard is the standard. When you go in that game, you’re representing everybody. You got to preserve the shutout when you have a chance to do that, but it’s a learning opportunity."

The Hokies’ second-quarter touchdowns came on a 1-yard run by Jalen Holston and an 11-yard pass from Wells to Jadan Blue. Wells later added a 27-yard touchdown pass to Bryce Duke.

Wells, who threw four interceptions in Virginia Tech’s season-opening loss to Old Dominion, has not thrown an interception in the Hokies’ past two games.

“I thought I played well,” Wells said. “Made some completions to start drives, and then we had some big third-down conversions that really helped the momentum of the offense. When you have drive starters like that that get the whole drive, the whole mood, started, it really helps.”

Wofford, which has been outscored 84-7 this season, ventured into Virginia Tech territory once and finished with just 199 yards of offense.

“It was great to see us get a touchdown there in the fourth quarter after struggling for a few quarters,” Wofford coach Josh Conklin said. “We created some explosive plays. The defense battled their tails off all game long, which was encouraging to see.”

Wofford: Conklin overhauled his coaching staff after the Terriers went 1-10 in 2021, bringing in 10 new assistants. Yet the results have been the same.

Virginia Tech: As expected, the Hokies put up good numbers in every phase of the game, but they probably didn’t learn anything about themselves. The Hokies will face stiffer competition when West Virginia visits for a Thursday showdown between two border neighbors and old Big East Conference rivals.

Wells and backup Jason Brown combined to complete passes to 11 different receivers, with Wells completing passes to nine different ones. Christian Moss and Nick Gallo led the Hokies with five receptions each.

“That’s who we need to be, and I think that’s who Grant is,” Pry said. “It’s not about a guy. It’s about the right throw, and he’s the kind of quarterback that can do that.”

TRYING TO GET HEALTHY

The Hokies played without defensive linemen TyJuan Garbutt and Josh Fuga and tailback Keshawn King, all who were held out because of injuries. Pry hopes all three will be able to go against the Mountaineers.

“If we felt they could have gone and it was the right thing, then they would have,” Pry said. “Just didn’t get well enough. We went all the way to today with Keshawn, and he just couldn’t get to full speed. … We definitely got to get healthy and be healthy going into Thursday night.

Wofford: The Terriers play at Kennesaw State on Saturday.