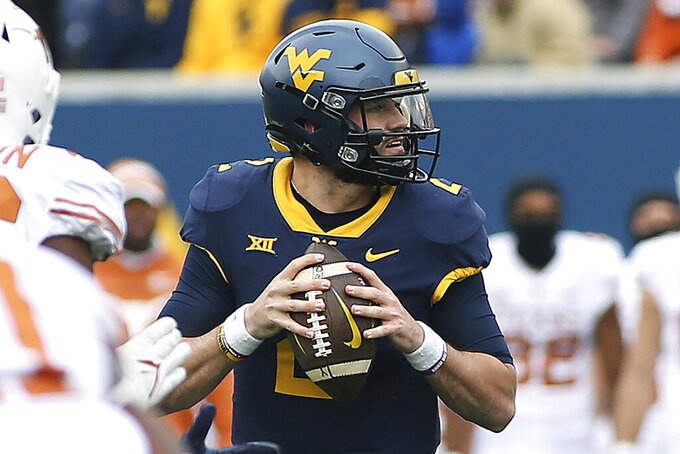 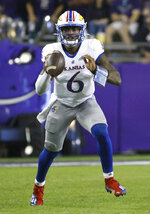 LAWRENCE, Kan. (AP) — West Virginia has gone through a rollercoaster of a season that includes soaring wins over Virginia Tech and Iowa State and crushing losses to Maryland and Texas Tech, and it all leaves the Mountaineers with everything on the line Saturday.

Knock off Kansas and they go to a bowl game. Lose and they're probably sitting the holiday season out.

“We know we've got one more,” said Mountaineers quarterback Jarret Doege, who threw three touchdown passes in a 31-23 victory over Texas last week that knocked the Longhorns out of bowl contention. “The job's not finished. We've got to go to Kansas and take care of business. Because we saw (at Kansas State) what could happen if you don't.”

Taking care of business against Kansas isn't as easy at it used to be, either.

While the Mountaineers (5-6, 3-5 Big 12) are still heavily favored, the Jayhawks (2-9, 1-7) also beat the Longhorns a couple weeks ago and nearly followed up their rare win in Austin with a win over TCU last weekend.

“At the beginning of the month we talked about, hopefully we will be a team that’ll be in a short period of time playing in December or January,” first-year Jayhawks coach Lance Leipold said. “In order to do that, you need to play well in November. We’ve talked about a chance to end the month 2-2 and a step in the right direction.”

“Though minimal for many, maybe, a .500 month would be a nice shot in the arm heading into the off season, heading into recruiting, and heading into winter conditioning," Leipold said. "Those are the things we talk about.”

The Mountaineers were a bumbling mess against the Wildcats a couple weeks ago, but they looked like a different team entirely against Texas. They were penalized for just 19 yards and didn't turn the ball over in a must-win game.

“We just didn’t play clean football and Kansas State did. This was a clean football game by us,” Mountaineers coach Neal Brown said. “Keeps us alive for another week and puts extra meaning on that game when we travel to Lawrence.”

Doege chose not to participate with other seniors in a pregame ceremony last week, leading some to speculate that he might take advantage of COVID-19 rules that grant players another season of eligibility. He's had an up-and-down season, leading the Big 12 with 249 yards passing per game but also with 10 interceptions.

"I’ll sit down and talk with Coach Brown after the season and see what happens,” Doege said.

The Jayhawks will be honoring 15 seniors in their finale on Saturday. Some of them were recruited by David Beaty, played two seasons under Les Miles and finished their careers by trying to help Leipold turn things around.

THE FUTURE IS NOW

The Jayhawks thought they would redshirt Jalon Daniels this season, but injuries and Jason Bean's ineffectiveness pressed him into action. Daniels responded by going 43 of 60 for 457 yards with five touchdowns and one interception in games at Texas and TCU. He's only the fourth player in college football this season to complete 70% of his passes in consecutive road games, joining Mississippi State's Will Rogers, Iowa State's Brock Purdy and Aiden O'Connell of Purdue.

Perhaps the most surprising aspect of the Jayhawks' season is that they are the second least penalized team in the nation, which speaks volumes about the culture that Leipold brought with him from Buffalo.

“You want to play the game the right way and not beat yourself and give yourself an opportunity,” he explained. “Though we haven’t had a lot of wins this season, and we’re talking about a fine line of winning and losing, and we’ve played pretty much penalty-free. And we’ve seen how close the games have been these last two weeks, so we need to continue to do that. And it gives you a chance to be in football games.”