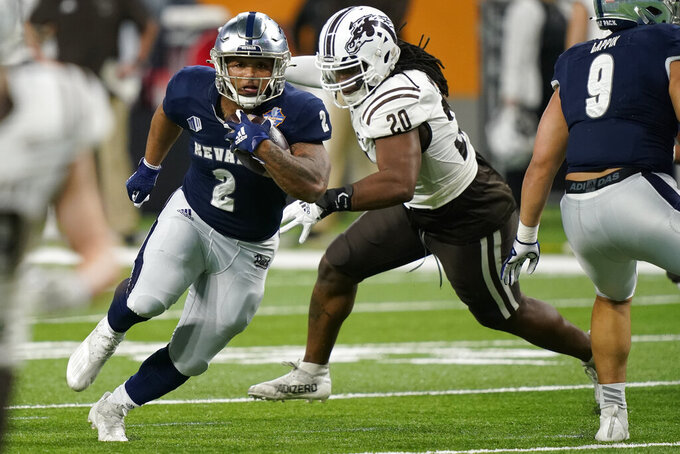 DETROIT (AP) — Kaleb Eleby threw two touchdowns and ran for another and Western Michigan recorded its second bowl victory in program history, rolling past Nevada 52-24 in the Quick Lane Bowl on Monday.

The Broncos' only other bowl victory came in the 2015 Bahamas Bowl against Middle Tennessee. Compared with that one, the Quick Lane Bowl was practically a home game for them.

“Doing it in Detroit is really special,” coach Tim Lester said. “To have fans here, so many alumni here. ... tons of people from Kalamazoo made the trip. It was awesome to see the hotel alive last night. And to play the way we did, in front of them with their support, it all came together. It's a big deal.”

Cox got the start after Carson Strong, who threw a school-record 36 touchdown passes, chose not to play in order to prepare for the NFL draft. The Wolf Pack was coached by assistant Vai Taua after Jay Norvell accepted the Colorado State coaching job.

“That's a really good football team,” Taua said. “They ran the ball well all season and they continued to do that.”

"Once (Braden) Fiske made the block I needed, I took it all the way to the house," said Tyler, who was named the game's MVP. “I was actually quite surprised once I broke through and ‘Oh, there’s nobody left.'”

Taua said: “You never want your first kickoff to go like that. I wouldn't call it a backbreaker. It was definitely another challenge the team would have to overcome right out of the gate.”

Midway through the first quarter, Eleby connected with Corey Crooms on a 74-yard scoring pass.

Kincaide, a Western Michigan sixth-year senior running back, had his biggest game of the season against his former team.

“It felt surreal,” he said. “It was a great feeling to leave with some of the guys I came in with in 2016 and to see a lot of familiar faces. It was great to go out this way.”

Kincaide played four seasons with the Wolf Pack before transferring before last season. He was the Broncos' third-string running back most of the season, but his role expanded when La'Darius Jefferson tested positive for COVID over the weekend.

A majority of Nevada's offensive starters during the regular season opted out of the bowl game to prepare for the NFL draft or transfer. The retooled unit had no chance to keep pace with the Broncos, who scored on two big plays in the opening quarter and then established a steady rushing attack.

Western Michigan: The Broncos will open the 2022 season on the road against Big Ten powerhouse Michigan State on Sept. 3. They will face the Spartans' bowl opponent, Atlantic Coast Conference champion Pitt, on Sept. 17.