Wisconsin RB Allen plays with power that belies his youth 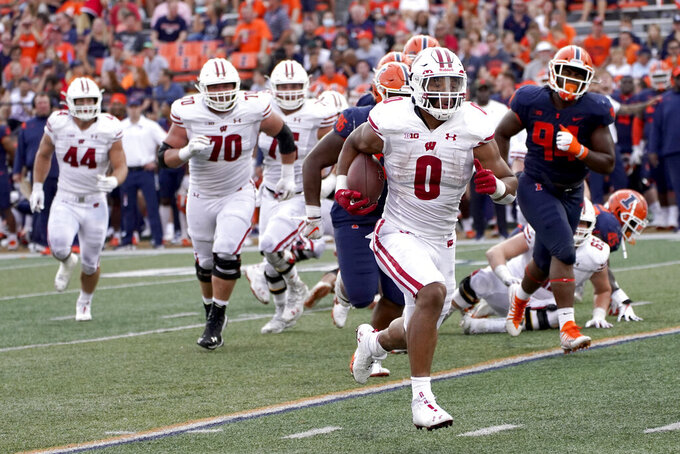 Wisconsin running back Braelon Allen heads for the end zone for a touchdown during the second half of an NCAA college football game against Illinois on Saturday, Oct. 9, 2021, in Champaign, Ill. Braelon Allen is only 17 years old, but the 6-foot-2, 238-pound freshman running back already is earning a reputation for his bruising approach each time he carries the ball. (AP Photo/Charles Rex Arbogast)

Allen graduated from high school early to begin his college football career this fall. He’s still getting accustomed to playing offense on a full-time basis after most colleges recruited him as a safety or linebacker. You wouldn’t know it from the way he runs over much older players.

“It doesn’t matter how much older these guys are,” said Allen, who won’t turn 18 until after the season. “I know they’re not stronger than me, so age doesn’t really play a factor in it.”

Allen, listed as 6-foot-2 and 238 pounds, had a breakthrough performance last week by rushing for 131 yards on 18 carries in a 24-0 victory at Illinois. He will try to build on that momentum Saturday when Wisconsin (2-3) hosts Army (3-1).

He already caught the attention of teammates as he continually bowled over Illinois defenders.

“We were literally talking about it on the sideline while he was running the ball,” Wisconsin safety Collin Wilder said after the game. “It’s like, ‘Wow, this kid should be studying for his algebra test after playing last night back home.'"

After deciding he was ready to begin playing college football, Allen increased his academic load last year to make sure he could graduate from Fond du Lac (Wisconsin) High School a year early. He already was physically stronger than any of his peers, thanks to consistent weight training that began his freshman year in high school.

Allen moved in with a trainer in the Milwaukee suburb of Muskego this year before enrolling at Wisconsin. He spent that time taking virtual classes while his trainer, Jonny Bridgewater, guided him through two workouts per day.

“Strength is one of the biggest advantages you can have,” Allen said. “I just feel like as I kept getting stronger, as long as I kept my speed and agility, it wasn’t going to be fair eventually. By my last high school season, I felt like I was bigger, stronger but still faster and more agile than anybody else."

Bridgewater calls Allen “probably one of the top five genetic freaks I’ve ever been able to train in the last 16 years.”

Allen made a similar impression once he got to Wisconsin’s campus and power-cleaned 405 pounds, meaning he lifted that much weight on a barbell from the floor to his shoulders in one movement. Wisconsin center Joe Tippmann recalled that nobody on the team could match it on that particular day.

“I was just like, ‘Holy hell, this guy is strong,’ “ offensive tackle Tyler Beach said.

That strength is making a difference on the field.

Wisconsin is counting on Clemson transfer Chez Mellusi’s speed and Allen’s power to give the Badgers a dynamic rushing tandem the rest of the season. Allen’s development is particularly critical now that Jalen Berger – the Badgers’ leading rusher last year – has been dismissed from the team.

Allen believes he and Mellusi are up to the challenge. Mellusi ran for a team-high 145 yards on 21 carries against Illinois as the Badgers totaled 391 yards rushing.

“I think that we showed what we’re capable of,” Allen said. “Anything below that is not reaching our standard that we set.”

The Badgers might even improve upon those totals once Allen gets more experience carrying the ball. Although he did play running back as well as defense in high school, Allen acknowledges he still has much to learn and needs to get better at making defenders miss him in the open field.

That Illinois game helped Allen realize how must improve while showcasing how good he already is.

“At first, I didn’t know what was going on,” Allen said. “I felt like I wasn’t running that hard. I got stuffed in the hole on one of my runs and it kind of made me a little bit angry. That shouldn’t happen to me. So I decided to put my pads down a little bit and started running over people.

“By the end of the game, they just weren’t too interested in tackling me.”

Allen hopes to have plenty of other defenses feeling the same way.