AAC title at stake as No. 19 Tulane visits No. 21 Cincinnati 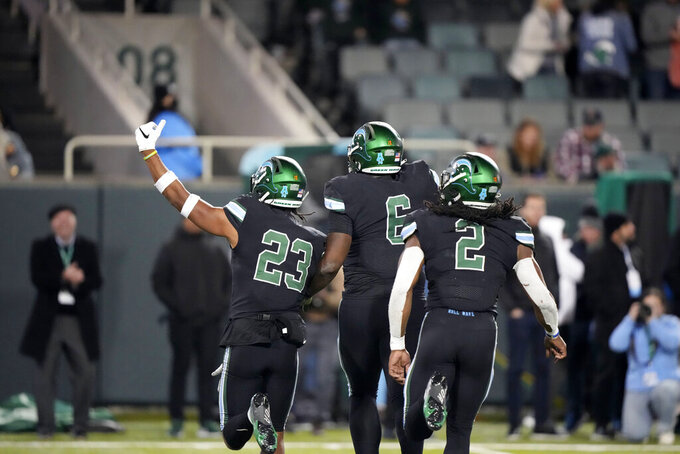 CINCINNATI (AP) — Many expected this to be a rebuilding season for the Cincinnati Bearcats, who saw nine players selected in the 2022 NFL draft from the team that reached the College Football Playoff semifinals.

Despite injuries and inconsistency this season, coach Luke Fickell’s No. 21 squad is in a familiar spot: looking to win the American Athletic Conference championship for the third straight season.

It all comes down to Friday’s showdown at Nippert Stadium between Cincinnati (9-2, 6-1 AAC) and No. 19 Tulane (9-2, 6-1 AAC). The winner will win the AAC regular-season title and host the championship game on Dec. 3.

“They really dominated the conference the past two seasons,” Tulane head coach Willie Fritz said of the Bearcats. “They have a great defense. On offense, they have some tremendous speed. Tremendous test for us. It’s big for our program. Any time you are on national television, it’s a big deal for the program.”

The Bearcats own the nation’s second-longest home winning streak at 32 consecutive games. Only Clemson (40) has a longer active streak.

“Nobody wants to be the guy that lets the streak go,” Bearcats LB Wil Huber said. “But it’s not something that you go into the week thinking, ‘I’m not going to lose this streak.’ ... We go into every game expecting to win.”

This is rare air for Tulane. In the preseason, AAC coaches picked the Green Wave to finish seventh following a 2-10 record last season.

“It’s a great feeling of reflecting back on how bad we did last year, winning only two games, and now we’ve got the chance of a lifetime,” running back Tayjae Spears said.

The Bearcats may be without quarterback Ben Bryant, who injured his right foot during the first half of last week’s win at Temple and whose status for Friday’s game is uncertain. Backup Evan Prater stepped in at Temple and threw for 127 yards and ran for another 24.

Fickell said Bryant, who has passed for 2,731 yards this season with 21 TDs, isn’t likely to practice much this week. But that doesn’t mean he won’t play.

“I don’t know that there’s going to be a whole lot of reps this week for Ben,” Fickell said. “But he’s played a lot of ball and if we get to the game-time situation and he’s able to play, then we could go that direction. We have got to have preparations in both ways.”

“By and large, they’re going to run their offense,” Fritz said. “They might run (Prater) a little bit more. That’s the big difference.”

The Bearcats will need to contain Spears on Friday, but that could be a tall order. Spears has averaged 11.7 yards per carry in November and combined for 290 rushing yards in the first quarter over the past three games.

“It’s just me and the O-line have been getting on the same page and bringing that confidence and trust in each other,” Spears said. “I can’t do it by myself. There’s 11 of us on the field. Everybody else is doing a great job of blocking downfield.”

Cincinnati has won four straight games against Tulane after beating the Green Wave only three times in 14 meetings dating back to 1909.